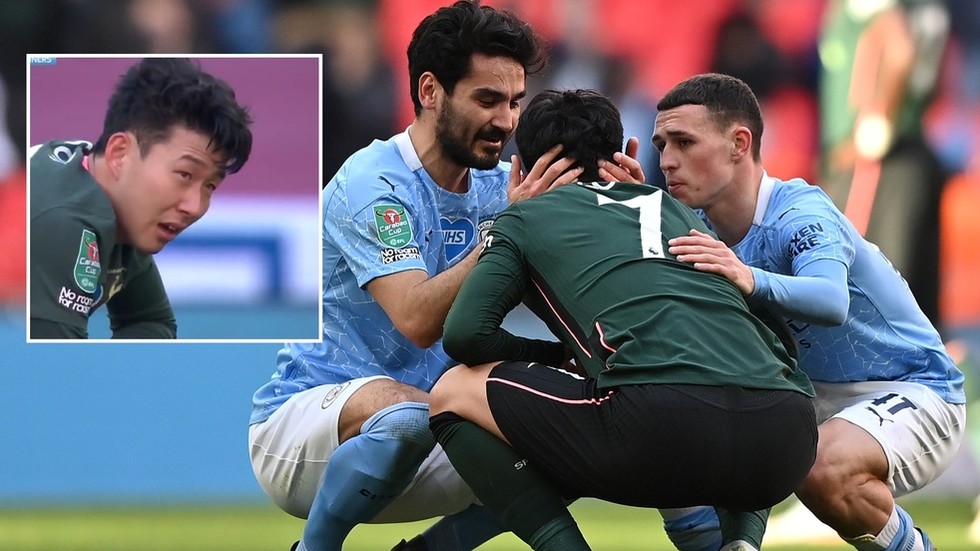 Football fans didn’t miss a beat when images appeared of Spurs’ Son Heung-min in tears upon the final whistle of his team’s Carabao Cup Final defeat to Manchester City, comparing the South Korean star to a viral meme.

Son and his Tottenham team continued their trophy drought in Sunday’s cup final in from of 8,000 fans at Wembley Stadium as a single Aymeric Laporte goal secured Manchester City’s fourth Carabao Cup win in a row – and it appears that Son took the defeat to heart as he collapsed into floods of tears at the game’s conclusion.

Several Manchester City players, including Ilkay Gundogan and Phil Foden, as well as his own teammate Gareth Bale, consoled the disappointed South Korean after the game but it doesn’t seem that Twitter was quite as conciliatory, with several fans taking aim at him for his post-match outburst of emotion.

“I’m crying too but with laughter at the fact Son is crying over a league cup and turns 29 soon,” one fan noted coldly.

Another said that Tottenham’s latest failure to capture a major trophy should compel him to “leave Spurs and go to a proper team“, while a third said that Son’s tears can be understood when you consider that he has “never won a major trophy.“

This is Heung-min Son’s honours page and people are wondering why he’s crying after losing out on the carabao cup…He’s 29 in 2 months btw pic.twitter.com/PxOptz2S4H

With Tottenham now seemingly at a crossroads, questions will surely be raised as to the future of their prized assets: Son and England skipper Harry Kane.

Both players would likely improve most major teams in Europe, and fans will be concerned as to the club’s ability to keep the players at the club at the expense of their own personal ambitions.

And as for who might be lined up to replace Mourinho? The likes of Julian Nagelsmann and Brendan Rodgers are thought to be high on Daniel Levy’s list of potential replacements – but it remains to be seen if he will be forced to expand his shortlist just a little bit further.

With the Super League debacle, the axing of Mourinho and now defeat in the Carabao Cup Final, it has been a bad week for Tottenham Hotspur. And it doesn’t look like the tide is going to turn anytime soon.