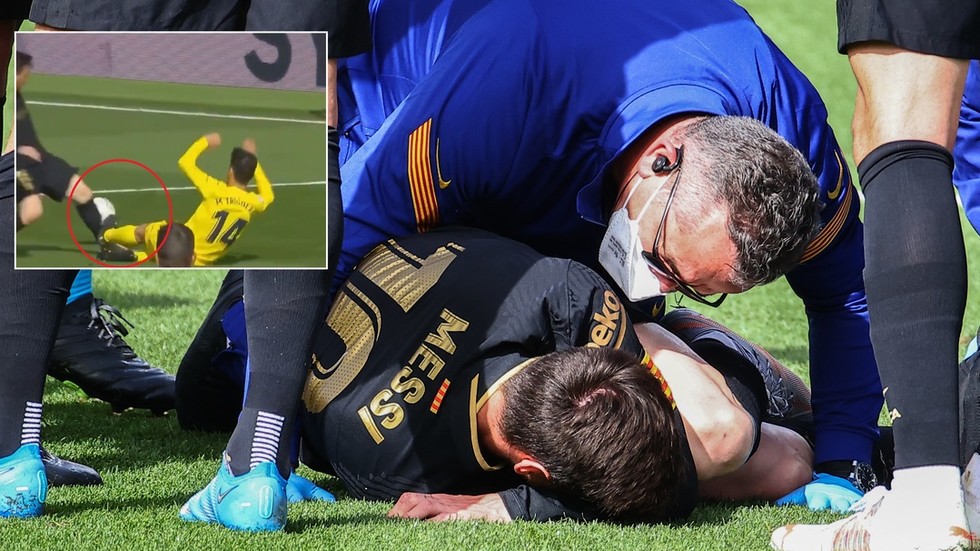 Fans feared for Lionel Messi after the Barcelona maestro was the victim of rough treatment from Villarreal midfielder Manu Trigueros, who was handed a straight red card for a lunge in the teams’ La Liga encounter.

With hosts Villarreal 2-1 down and chasing the game, Trigueros took his urgency too far as he went in on Messi in an attempt to win the ball in the 66th minute.

After initially making contact and flicking the ball away from the Barcelona number 10, Trigueros followed through with his leg extended, making contact with Messi’s lower shin.

While there may have been no malicious intent from the Villarreal man, the action undoubtedly imperiled Messi and Trigueros was handed his marching orders by referee Carlos del Cerro Grande

After treatment, Messi was able to dust himself down and carry on as the hosts were forced to play the remainder of the game with 10 men at Estadio de la Ceramica.

Fans online feared that Messi was being targeted for the kind of rough treatment he can often be subjected to as Barcelona’s main danger man – with some claiming the rash challenge could have ended the 33-year-old star’s season.

“Messi has now taken a whack to the face and a potential leg-breaking tackle – and that’s just in the last five minutes!” said one Twitter account.

“Yet he just gets up and carries on. Please don’t tell me he couldn’t handle the ‘physicality’ elsewhere.”

Another simply added: “What a dangerous tackle.”

Messi has now taken a whack to the face and a potential leg-breaking tackle – and that’s just in the last five minutes! Yet he just gets up and carries on. Please don’t tell me he couldn’t handle the “physicality” elsewhere.

Messi was again the target less than 10 minutes later when he was shoved by Villarreal’s Pau Torres after beating his man down the right and dangerously bearing down on the penalty box. Pau was handed a yellow for that infringement.

Earlier in the match, Villarreal had taken the lead through Nigerian youngster Samuel Chukwueze in the 26th minute as he latched onto a pass to round Barcelona goalkeeper Marc-Andre ter Stegen and finish from a tight angle.

Bidding to keep pace with La Liga leaders Atletico Madrid, Barcelona bounced back almost immediately with a quick-fire double through French forward Antoine Griezmann to put them 2-1 ahead.

Despite the opposition being down to 10 men for much of the second half, Barca failed to make the extra man count but still picked up a crucial three points.

That moved Ronald Koeman’s men level on 71 points with Real Madrid in the table, just two points behind leaders Atletico.

Barca and Atleti have both played 32 games while Zinedine Zidane’s defending champions have played one more.

Perhaps just importantly for Barcelona and their title challenge, talisman Messi emerged unscathed from what could have been a damaging 90 minutes for the Argentine star.