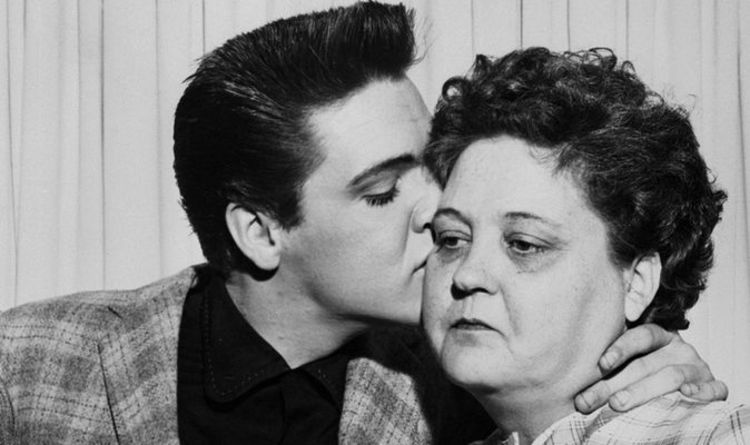 For the first time ever, Gracelend’s archives were opened to the public for an online tour, hosted by Vice President of Archives and Exhibits Angie Marchese. As we mark the birthday of The King’s devoted mother today, the tour gave a fascinating glimpse into the life of a simple woman who went from extreme poverty on Mississippi to unimaginable luxury but was never able to let go of her fears for her famous son.

Gladys Smith was born on April 25, 1912 in Pontotoc County. She married Vernon Presley on June 17, 1933. Vernon was only 17 and lied about his age when they registered the union.

Vernon built them a two-room ‘trackhouse’ with no indoor plumbing. They could not afford electricity. The pair never forgot their early struggles and it shaped everything they did, even when unimaginable riches poured in.

Elvis was born on January 8, 1935, but his twin brother Jesse was stillborn. Glady also lost her mother ‘Doll’ that year to tuberculosis and family members noted she was unusually protective and fearful around her new child. This would never go away, with Elvis and his mother remarkably close all their lives, even developing their own private baby language.

Glady’s greatest fear was always losing her son, so she was devastated when he received his military papers in December 1957, at the height of his early fame.

Gladys had slept in the same bed with her son until he was 13 and Elvis never spent a night away from the family home until he was 17.

Elvis later said:  “My mama never let me out of her sight.”

By 1957, the family was living in luxury at Graceland and Elvis lavished his mother with gifts (including a pink Cadillac, even though she couldn’t drive), but Gladys never forgot her roots.

The Archives Tour of Graceland showed one of her classic dresses, simple and loose in a plain dark colour, with large pockets.

Angie Marchese pointed out the worn edges and stitch marks which showed that frugal Gladys would always repair her own clothes and never waste them.

This was mirrored by Vernon who famously kept every single piece of paper, correspondence and bills that passed through Graceland.

Angie said: “It goes back to growing up with nothing in the Great Depression and having to keep receipts prove you had paid for something.”

Angie told viewers that whenever Elvis redecorated, Vernon kept all the old items in the outbuildings rather than dispose of them.

Partly because his son would often change his mind but also, Angie said, because  “Vernon never knew when all of this could possibly go away and you might need something again one day.”

By 1957, Elvis was already constantly away on tour and starting to make movies in Los Angeles and Gladys was lonely and isolated at Graceland.

She told family friend Frank Richards: “I’m the most miserable woman in the world… I’m guarded. I can’t buy my own groceries. I can’t see my neighbour.”

Echoing what would later happen to her son, the emotionally fragile Gladys had started taking pills to sleep, pills to wake up and was drinking vodka through the day to calm her nerves.

DON’T MISS
Elvis Graceland: Incredible first and last thing The King EVER did there
Elvis Presley: The only actress who DIDN’T want to kiss The King
Elvis Presley mother: How Elvis ‘wrote’ special song for Gladys

Glady’s sadness is clear in the pictures with Elvis in his military uniform and seeing him off to training camp.

Her health was already failing and she soon deteriorated. On August 10, 1958, Gladys was taken to hospital after driving back with Vernon from Fort Hood in Texas where their son was taking advanced tank training.

Elvis rushed home on August 13 and his mother died of a heart attack the following day. She was just 46.

At the funeral three days later, Elvis sobbed uncontrollably and said: “Goodbye, darling. We loved you. Oh God, everything I have is gone. I lived my life for you. I loved you so much.”

When Gladys died, the newspapers reported that the star was granted temporary compassionate leave from his military service which was extended after: “Elvis was confined to bed temporarily with a virus infection and slight fever.”

Before he returned to Texas, he left strict instructions about his mother’s belongings.

On the archives tour, Angie said: “When she passed in 1958, Elvis ordered that all of her things must stay in her room until he came home from the army.”

After The King himself died in 1977, nothing was touched in the house and Elvis’ own clothes were still hanging in his closet in 1982 when the house was opened to the public.

During that period, Glady’s own clothes were discovered in the attic. Angie revealed that “it was all wrapped in 1962 newspaper.”

Vernon travelled to Germany with Elvis during his miltary service, and when they returned in 1960, he moved into his own house next door to start a new relationship with his second wife, Dee Stanley, who he had married that year.

Elvis’ aunt Delta took over Vernon and Gladys’ rooms at Graceland in 1967.

When the process began of properly inventorying the contents of Graceland before the public openings, a treasure trove was discovered at the back of Gladys’ wardrobe.

Angie said: “Gladys also kept a wealth of photographs in her closet which are filed separately in the archives along with Glady’s wardrobe and personal effects.”

They are part of an extrordinary collection which includes nine million documents, 50,000 photographs, over 3,000 textile and costume items, cars, planes and The King’s personal record collection, with over 5,000 albums.