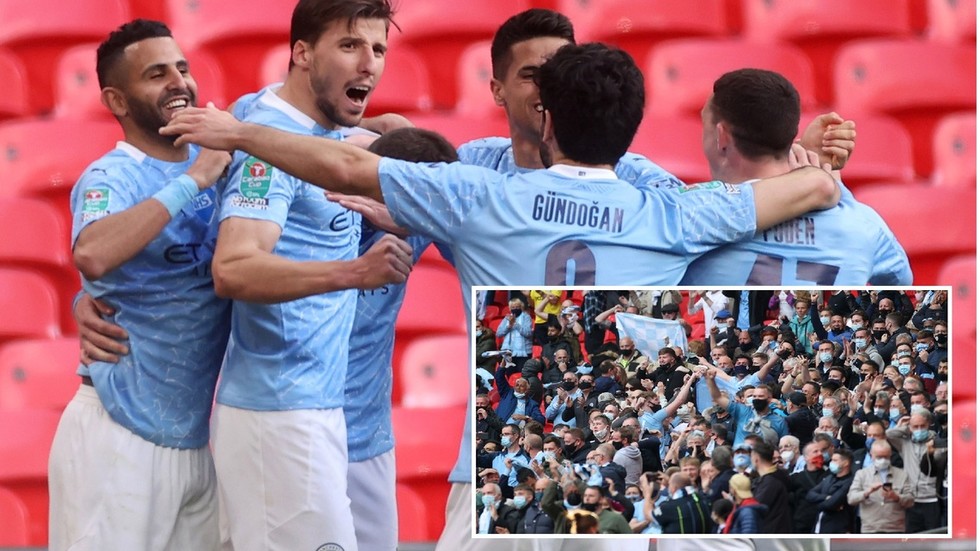 Manchester City welcomed fans back to English football as they secured the first silverware of the season with a late Aymeric Laporte strike enough to clinch their fourth successive Carabao Cup at the expense of Tottenham.

Frenchman Laporte provided the breakthrough in what was in truth a dull affair in front of around 8,000 fans at Wembley Stadium on Sunday when he nodded in a late Kevin de Bruyne free kick to continue Pep Guardiola’s impressive cup final record.

Premier League champions-elect City had the better of the action throughout the 90 minutes but the identity of the goalscorer will ruffle some feathers in North London, as Laporte was lucky to remain on the field after coming close to picking up a second yellow card in the first half.

Tottenham, who had former player Ryan Mason in the dugout following Jose Mourinho’s sacking last week, continue their trophy drought, with the Londoners having gone empty handed in each of the previous 12 seasons.

The contrast between luckless Spurs’ form and that of Manchester City, though, couldn’t be clearer. Guardiola’s side have all but secured what would be the Spaniard’s third Premier League crown – while having already secured their position in this season’s Champions League semi-finals.The win is a successful rebound from their defeat to Chelsea in last week’s FA Cup semi-final as they chased an historic ‘quadruple’, with goalscorer Laporte noting in his post-match comments of the importance of returning to winning ways.

“It’s very special for us after we lost in the FA Cup. [We needed] to get confidence and keep going. In the last two months we have been so good. We have to keep this rhythm, to win more titles,” he told Sky Sports.

“It was difficult today, they were a good team. It’s never easy. Today we have done very well.I was thinking about my yellow card. We know a little mistake can cost you. I was being careful.

🗣 “I was in big clubs, that’s why it’s easier to do.” 🏆Pep Guardiola reaction to winning his 25th trophy in his managerial career pic.twitter.com/IuwoR3CggD

For Tottenham, defeat caps what has been a week to forget for the club. They faced immediate fan backlash when they were revealed as one of the initial 12 signatories to the fiercely unpopular Super League last Sunday, before landing on the back pages once more the following Monday when they announced the departure of Mourinho after just 17 months in charge.

His temporary replacement, 29-year-old Ryan Mason, though, proved incapable adding to Spurs’ trophy cabinet which has gathered dust since former boss Juande Ramos claimed the EFL Cup back in 2008.

The man in the opposite dugout, Guardiola, was more than happy with the result – and his 30th major trophy as a manager.

“Today we are incredibly happy that we have four in a row in this competition,” he said.

“We tried to win the game, created a lot of chances. They had some chances on the counter but in general we had a good game.”