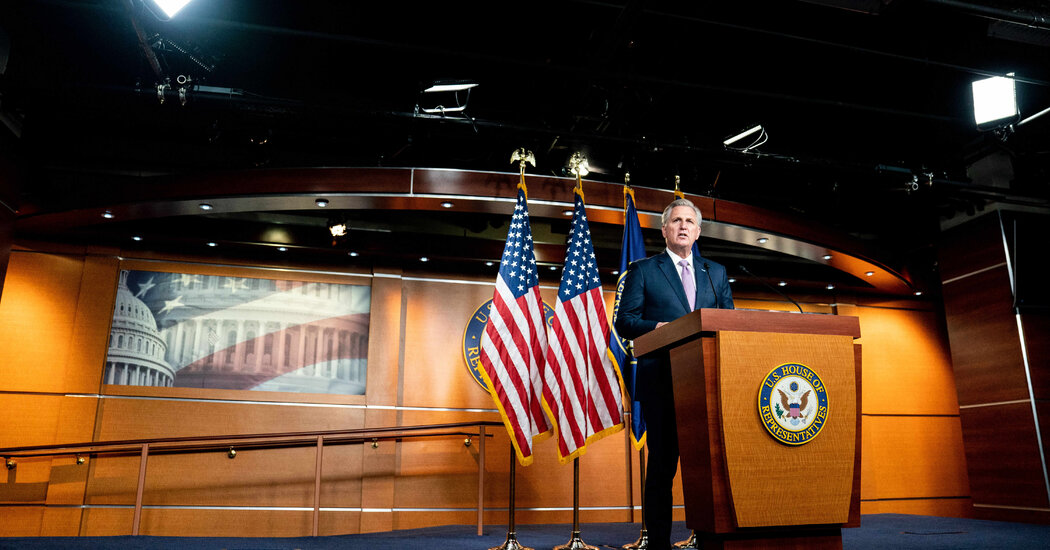 Mr. McCarthy took a seat at a family restaurant in Davenport, Iowa, during a recent visit to highlight a disputed congressional race left over from 2020. Representative Mariannette Miller-Meeks, a Republican, had prevailed by six votes over Rita Hart, a Democrat who was appealing the matter to a House committee. Mr. McCarthy accused Democrats of trying to steal the seat, which invited immediate charges of a yawning double standard given how Mr. McCarthy had supported Mr. Trump’s efforts on a much grander scale.

Later that day, Ms. Hart conceded defeat, and the dispute was resolved without riots. “This is a good day,” Mr. McCarthy said. But that morning, Mr. Biden had unveiled his infrastructure bill and had called Mr. McConnell, and not Mr. McCarthy, to brief him ahead of time. Mr. McCarthy volunteered that he had not once spoken to Mr. Biden since Inauguration Day, a slight he maintained did not bother him, although the pique in his voice suggested otherwise.

“When he was vice president, we would do stuff together,” Mr. McCarthy said. “He would have me up to eat breakfast at his residence.”

Mr. McCarthy flashed a photo of himself from his phone with the vice president at the time, separated by tall glasses of orange juice and plates of freshly cut melon and blueberries. Mr. McCarthy, who likes to attend Hollywood award shows and big-ticket galas, brandished phone photos of himself over two days with other eminences, including Mr. Trump, Pope Francis, Arnold Schwarzenegger and Kobe Bryant. There was also one of himself in high school with majestically feathered hair.

But he is also a small-town guy who keeps up with old boyhood pals and still seems enamored of having been popular at Bakersfield High School, where he played tight end on the football team. He travels home often to his district lined with swaying oil jacks, spread across California’s agricultural interior, two hours north and a world removed from Los Angeles, not to mention Washington 2,700 miles away.

The son of a firefighter, Mr. McCarthy has a shorthand bio that’s well-worn: He won $ 5,000 in a lottery, left community college to open a deli, learned firsthand the havoc government intrusion can inflict on business owners, sold the deli, earned a marketing degree and M.B.A. at California State University, Bakersfield, and was elected to the California Legislature in 2002.