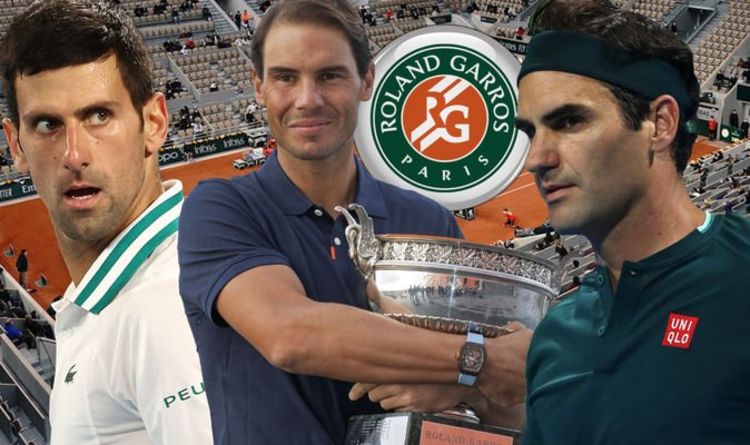 There’s not many players in tennis history who have 25 titles at a combined two events, but after Rafael Nadal‘s Barcelona Open defeat of Stefanos Tsitsipas on Sunday – the Spaniard is one of them.

So successful has he been in Catalonia that the main court is named ‘Pista Rafa Nadal’ and has been since 2017.

Nadal pursues his 14th Roland Garros triumph next month, before which he will hope to win in Madrid and Rome as he builds confidence in his pursuit of a 21st Grand Slam.

That would see him become the first male player ever to surpass 20, having joined long-time rival Roger Federer on that tally by winning in Paris last year.

Novak Djokovic is also closing in on the pair as his Australian Open victory in February moved him on to 18 majors, ahead of Wimbledon and the US Open later this year, both Slams where he will be the favourite.

And as the ‘Greatest of All Time’ battle rages on, this year’s French Open could be a defining moment in the all-time Slam race.

If the ‘King of Clay’ can maintain his dominance on his favoured surface, on which he has won 61 of his 87 career titles, this year then Djokovic remains three behind.

The Serbian would need to win at Wimbledon, the US Open and the Australian Open just to be level with Nadal going into the 2022 French Open.

Yet while the world No 1 has struggled with the transition to clay, losing to Dan Evans in the Monte Carlo Masters round of 16 and to Aslan Karatsev in the Serbia Open semi-finals, he and Federer have hope of downing Nadal in the French capital.

That’s because while Nadal battled to an extremely hard-fought victory against Tsitsipas in Barcelona, his second-set tiebreak loss – 8-6 having been 4-2 up – was his ninth consecutive against a top 10 player.

Not since the ATP Finals way back in November 2019, when he saved a match point in a group stage match against Daniil Medvedev and came from 1-5 down then won a third-set tiebreak in London, has he won a tiebreak against a top-10 player.

That will give Djokovic and Federer hope should they be paired against Nadal at any point in the tournament.

The Serbian is 29-27 against Nadal, though was crushed by him in straight sets in last year’s French Open final, while Federer has 16 wins to Nadal’s 24 in their meetings.

And the Spaniard has won 32 of 41 clay-court matches against his ‘Big Three’ rivals – though Djokovic enjoyed a favourable run of four victories in five showdowns between 2014 and 2016, including a Roland Garros quarter-final triumph in 2015.

Clearly Nadal is formidable on the red stuff, yet there are areas there to be exploited by the very best in the game, which Djokovic certainly is. It is hoped Federer can also continue to have a say at Slams despite over 12 months out through injury.

Nadal admitted after beating Tsitsipas: “I think I have room to keep improving. It was not perfect. I really believe I can play better than what I’m doing on clay.

“I really hope that the victory today is going to help me to raise the level to fight for the next couple of events I’m going to play.”

Djokovic and Federer, but in particular the record-hungry world No 1, will Nadal is wrong.

But if they do face one another on the clay once more this summer, with potential warm-up showdowns at the Madrid Open and the Italian Open, Djokovic will know that if he takes a set to a tiebreak, he might be the one with the upper hand.