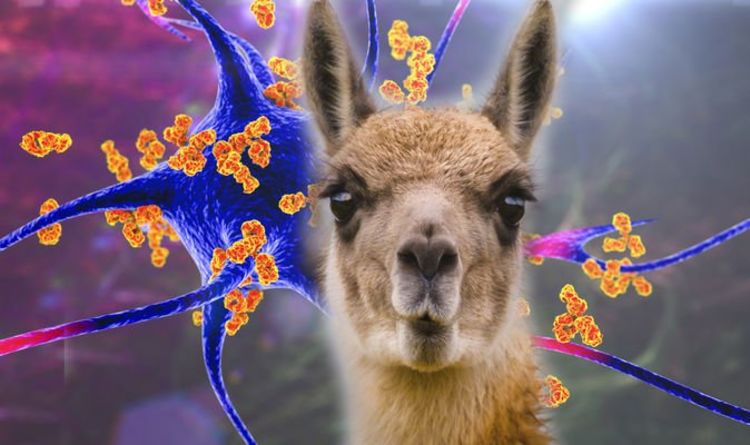 As COVID-19 continues to spread worldwide, scientists race to determine vaccines and drugs that can combat the pandemic. A team of Australian researchers at the Walter and Eliza Hall Institute of Medical Research (WEHI), the Doherty Institute, and the Kirby Institute have identified neutralizing nanobodies from llama’s could help block the SARS-CoV-2 virus from entering cells.

Dr Aashish Manglik, assistant professor of anaesthesia pharmaceutical chemistry explained: “Everybody makes antibodies, and we make antibodies to fight off all kinds of infections.

“We’re all hoping to get the coronavirus vaccine to help us make antibodies against the virus and help us prevent getting infected.

“But it turns out that animals like llamas or alpacas or camels make these tiny little antibodies that have been dubbed nanobodies.

“The cool thing about these nanobodies is that they’re very stable little proteins.

“And we’ve come up with a way of making these nanobodies that will attack the SARS virus and we think this can be a really interesting alternative.”

Nanobodies are mini antibodies 10 times smaller than regular antibodies produced naturally by alpacas, camels, and llamas in response to infection.

Two researchers, Raymond Hamers and Cecile Casterman, had discovered a new class of antibodies that were devoid of light chains and had a single antigen recognizing domain.

These antibodies were later found in different camelid species, including llamas and alpacas.

Despite being so small, these antibodies retain specificity and affinity similar to traditional antibodies while being easier to clone, express, and manipulate.

Critical to their use as antivirals in humans, they have also proven to be highly potent inhibitors of viral infections, highly needed amid the coronavirus pandemic.

Nanobodies are derived from a special type of antibodies naturally produced by the immune systems of camelids, i.e., camels, llamas, and alpacas, said Medical Life Sciences.

The health site continued: “A few years ago scientists showed that humanized nanobodies may be more effective at treating an autoimmune form of thrombotic thrombocytopenic purpura, a rare blotting clotting disorder, than current therapies.

“One of the exciting things about nanobodies is that, unlike most regular antibodies, they can be aerosolized and inhaled to coat the lungs and airways.

“We think this could be especially beneficial for preventing COVID-19 transmission through the air.”

Another study published in the National Library of Health, Nanobodies to combat COVID-19 was analysed.

The study noted: “Nanobodies (Nbs)have suppressed inflammation in several models, suggesting that they may target inflammatory responses, and could thus mitigate the cytokine storms suggested to be experienced by COVID-19 patients after the development of characteristic lung damage.

“A further advantage for Nbs concerns their mode of administration; they can be nebulized and, using an inhaler mechanism, delivered directly to the lung, where they may be able to exert anti-inflammatory and anti-viral effects in the context of COVID-19 pathology.

“In conclusion, Nbs are small, stable, and simple to produce, and hold promise as therapeutic proteins to be used in novel interventions for COVID-19.

“Furthermore, the potential utility of Nbs in diagnostics for COVID-19 is an area requiring further study.”