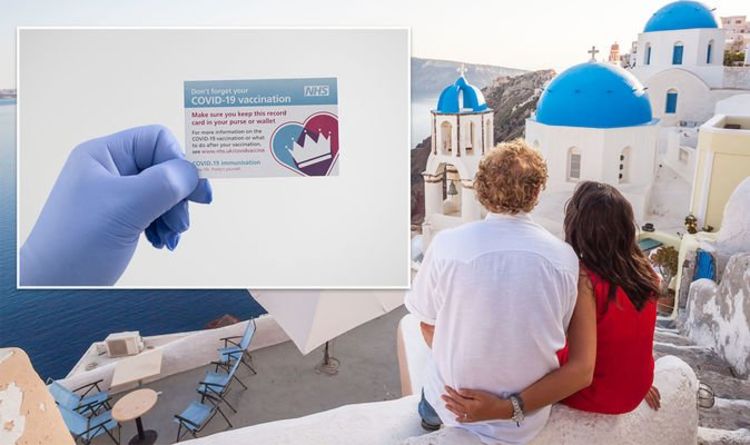 Holidays to some foreign destinations are set to resume from May 17, and according to Greece’s Tourism Board, the nation is “confident” it will make it onto the “green list”. Though the nation has set out guidelines to welcome back vaccinated Britons, an official health passport has not yet been confirmed.

Despite this, the country says one is “forthcoming”.

According to The Times, until then, the nation will accept paper NHS vaccination appointment cards.

In a statement, the Greek Tourism Board said: “Our understanding is that a health pass will be forthcoming.”

So far, it is not clear what this health pass will be however the European Union (EU) is currently working on official bloc-wide documentation.

READ MORE: USA flights: Can I travel to the USA from the UK yet?

There are concerns from some nations, though, that this could encourage “forgery”.

It is not yet clear which countries will be on the UK’s “green list”.

The Government’s Global Travel Taskforce is currently in discussions over this and will use the latest COVID-19 data from around the world to determine which nations can be categorised as “safe”.

Travellers returning from “green” countries will not be required to self-isolate when they land in the UK.

“All countries we keep under constant review and judge the state of the pandemic in those countries.

“This work is done actually not by the Government itself, it’s done by the Joint Biosecurity Centre (JBC).

“They look at the issue and they will make their determination based on what they think we need to do and clearly if they think there is a variant of concern for instance if they think the disease is taking off rapidly in that country or they have any other reason for concern then it will move onto the red list and downwards if it is going in a different direction.

“It is the JBC that does it and we keep it under constant review.”

He declined to offer any hints as to which nations will be included on the list.

According to Sky News, Portugal is also confident it will be categorised as “green”.