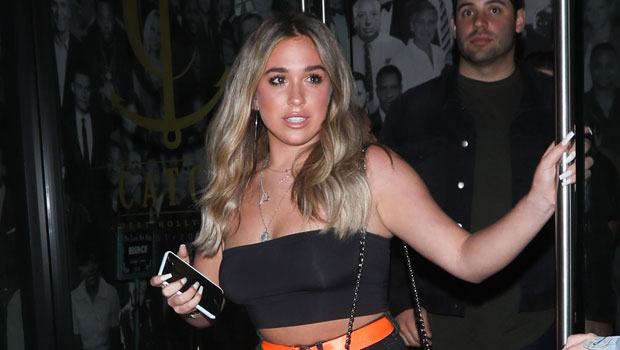 Kim Zolciak’s daughters have proven to be the best models for her Salty K swimwear line. Ariana Biermann, 19, flaunted her killer figure in the brand’s tiny lavender bikini.

As if Kim Zolciak‘s bikini body wasn’t enough to show off her amazing Salty K swimwear brand, she has two stunning adult daughters to help model her various styles. Kim’s 19-year-old daughter Ariana Biermann showed off her perfect figure in Salty K’s “Just A Little Top” and “Just A Little Bottom” in a series of Instagram photos on Sun. Apr. 25. She was thrilled to be back at the beach, and posed along a wooden pier above the ocean water.

The swimwear featured a classic triangle top that tied around the back and around her neck. The tiny bottoms included slightly bunched up fabric in the front with long strings that tied at the hipline. The thong backside allowed Ariana to show off her perky behind, while the front facing photos allowed the Don’t Be Tardy star to flaunt her tight and toned abs.

Ariana accessorized with pink square framed sunglasses with rose tinted lenses. She added a long sleeved pink and white stripe beach coverall shirt, which she playfully wore down around her elbows in some shots as to give her followers a better look at the thong bikini. The reality star even managed to capture a dolphin swimming past her in the background of one of the photos.

If fans love Ariana’s bikini as a set, they better act fast. On Salty K’s site it was noted that there was only one top left in stock. The top and bottom are each $ 90, but with beach season right around the corner it seems that the swimwear is moving fast. In addition to the “lavender ice” color that Ariana sported, the top and bottom also come in a coral color called “orange sunrise” and for a darker hue there’s “beyond black.” All three colors come with matching headbands that go for $ 25, although Ariana didn’t sport one and chose to let her long blonde locks flow in the ocean breeze.

Ariana wrote in the caption, “peep my little dolphin friend in the 3rd photo, I’m so happy at the beach!!!! moving asap.” Her proud mama Kim wrote in the comments, “The most beautiful” with hearts for eyes emojis. Ariana sweetly replied back, “I mean they do say I look like my beautiful mom.” Pal Scarlett Stallone left a series of fire emojis and fan @samiramariajabr91 told Ariana “Your glow up is life changing.” Ariana responded back to the compliment with “ILY” for “I love you.” She really is looking absolutely amazing these days.