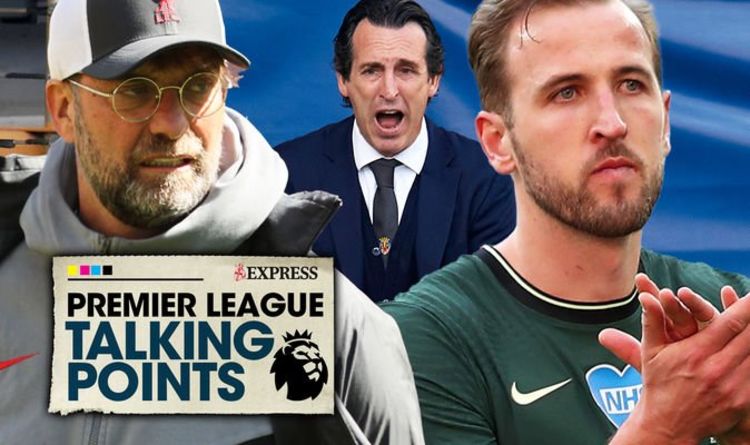 Matthew Dunn rounds up the latest Premier League talking points in his weekly column with Liverpool potentially set to help see their successors crowned, Brighton still not out of danger, Leicester good for Champions League and Klopp to escape with a top four place as Tottenham go all Spursy.

Safe to say now it was a double celebration for Manchester City at Wembley on Sunday as hours before their Carabao Cup final success any last doubts that they would not win the league were killed off.

Now the race looks set to be finished mathematically next week. Manchester City will beat Crystal Palace at Selhurst Park on Saturday lunch-time and then finally Liverpool get to have a say in the title race – by crowning their successors.

A win for Liverpool against Manchester United at Old Trafford next Sunday would not only restore some belief at the end of an absolute head-scratcher of a season for Jurgen Klopp’s team, but it would put City finally over the line.

Then a serious reinvention needs to begin at Anfield if they are to match the standards Pep Guardiola has re-established in recent months.

NO WAY FOR ARSENAL TO MEET AN EX

It was an embarrassing own goal in all senses of the word. When Bernd Leno let the ball through his legs on Friday night, he put Arsenal in the worst position known to mankind.

Bumping into your ex knowing your life is worse now than it was when you parted.

Unai Emery was sacked when the Gunners were eighth in November 2019 and a win against Everton would have had Mikel Arteta’s side clinging on to the same position.

Instead, they are 10th – a position that highlights their lack of direction and makes a mockery of their ‘Super League’ credentials.

Still, as any acne-infected teenager will tell you, it would have been even worse if they had been Spotified.

SEAGULLS COULD STILL BE DRAGGED INTO THE TRAWLER BY FULHAM

The thought of a combination of Sam Allardyce and gathering momentum is totally frightening. However, when Keinan Davis’s injury time strike denied West Brom their third win in four matches, their survival battle was effectively ended.

Burnley’s emphatic win at Wolves eased fears that they were on the brink so now it is just up to Fulham to pull off the shock.

They will have had 13 days to prepare to face a Chelsea side locked in the middle of a Champions League upset, so Saturday could be a big chance to put the cat among the pigeons.

Brighton, by contrast, seem to be running through treacle. For all their positive football and well-regarded philosophies, they have struggled to keep in front of the bottom three.

Just when the fixture list feels like it cannot get any more convoluted, Leicester are suddenly involved in the only two Premier League fixtures this midweek.

Not only is it a chance to catch up their game in hand on the others chasing Champions League places against Palace, but they get to steal a march on those rivals when they play Southampton on Friday before anybody else kicks a ball in anger.

A big six team would claim a big six points. Leicester can show they are more worthy of the name than some others that have been bandying it about last weekend.

Undoubtedly the biggest talking point from here on in is who finishes in those top-four places and qualifies for the Champions League.

The two Manchester clubs are a given.

And having gone through the remaining fixtures one-by-one, lining up behind them will be…

Chelsea get bogged down with other interests and Liverpool pip Tottenham on goal difference after Harry Kane and co once again go all Spursy and lose at Leicester on the final day of the season.