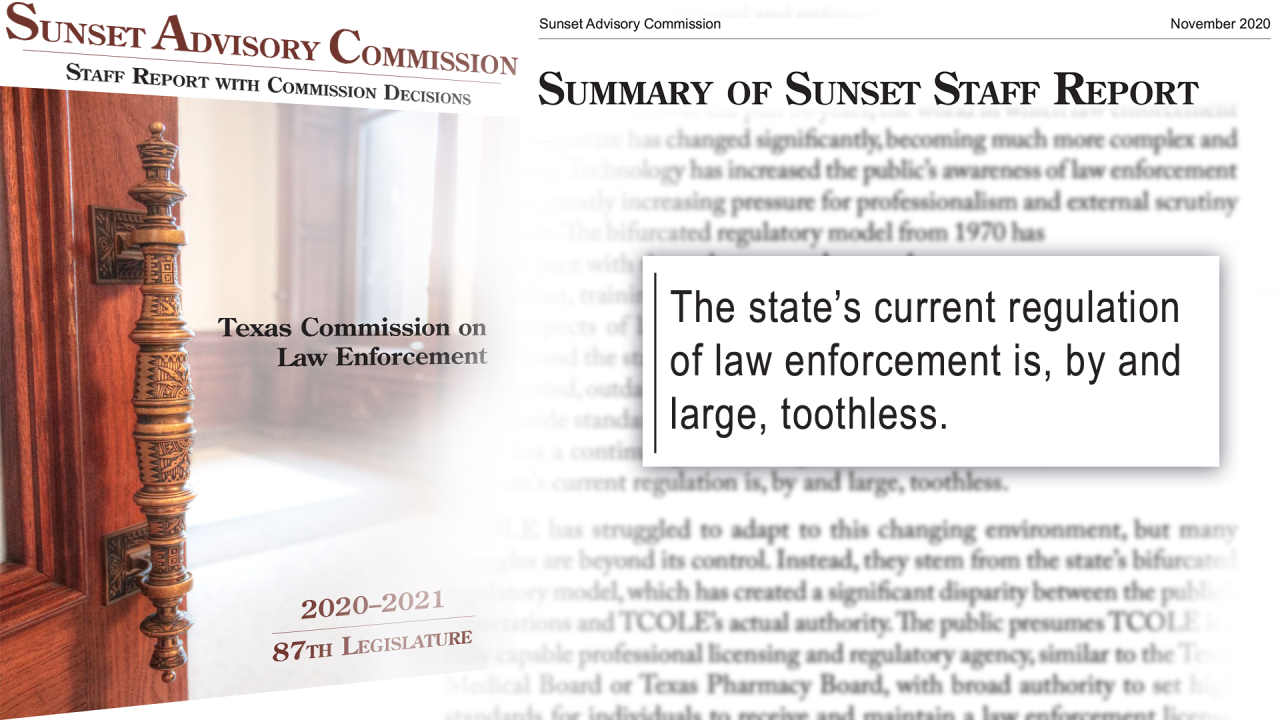 AUSTIN (KXAN) – Of the many things uncovered in KXAN’s Bargaining the Badge investigative series, one thing is certain: Texas peace officers who give up their police licenses rarely serve jail time.

KXAN’s investigation found that since 2015 only 444 peace officers accused of crimes surrendered their license — a lifetime ban from working in law enforcement. Based on records we were able to obtain on these 444 license surrenders, only 17 served at least one day in jail.

Most of the surrenders happened amid criminal investigations. Others happened to stop a criminal prosecution.

Analysis of court records we could obtain on permanent surrenders since 2015 showed all were related to some sort of misconduct. Every surrender was voluntary.

The Texas Sunset Advisory Commission opened its review of the Texas Commission on Law Enforcement in 2019.

It took the Texas Sunset Review Commission 4,000 hours, 69 meetings and 11,647 anonymous survey responses to figure out the Texas Commission on Law Enforcement’s job of regulating law enforcement is ineffective.

Comments included: “toothless,” “outdated,” and “poor accountability.” All of that taken from the opening paragraph of the Sunset Advisory Commission’s summary of its 2020 review of TCOLE.

The report also made clear this outcome isn’t TCOLE’s fault.

The 63-page report — one of the more scathing Sunset reports in recent years — found state lawmakers are the reason for TCOLE operating on 40-plus year-old standards with practically no way to sanction its licensees for misconduct.

“The public presumes TCOLE is a fully capable professional licensing and regulatory agency, similar to the Texas Medical Board or Texas Pharmacy Board, with broad authority to set high standards for individuals to receive and maintain a law enforcement license, and to hold these licensees fully accountable,” the Sunset staff report published in November stated.

But the report says TCOLE has relatively limited authority to set or enforce anything but minimum licensure standards — deemed to be “outdated” and “insufficient.”

Texas officers accused of violence, other crimes avoid prison in deals with prosecutors

“We have 21 agencies that we’re reviewing under this Sunset cycle. TCOLE I’ll have to say is our most important,” Sunset Commission Chairman Rep. John Cyrier, a Lockhart Republican, told KXAN in January.

The bill is supposed to fix the problems with TCOLE discovered during the Sunset review. But the bill, as currently drafted, does not appear to provide TCOLE authority to sanction licensees for misconduct.

“It’s no question in anybody’s mind that it [TCOLE] is broken and we need to do a complete overhaul of our law enforcement in the state of Texas. And what I keep saying is a modernization; we need to bring up to modern times laws and rules and things that were done, even just 10 years ago have changed,” Cyrier said.

The representative said he’s been working closely with colleagues and stakeholders on the legislation but many questions will need to be addressed before debate on the floor. Cyrier said that while he won’t publicly comment further at this time, work on the bill will press on. He declined to be interviewed for this report.

“So there’s nothing in HB 1550 that would enact a statewide standard of misconduct immediately upon enactment?” Rep. Matt Schaefer asked Sunset’s Project Manager Andrew McConnell during an April 1 House Homeland Security and Public Safety Committee hearing.

“No sir,” McConnell responded. “And there’s nothing in HB 1550 that would authorize TCOLE to do that by rule?” Schaefer asked.

Cyrier’s bill, as written, would delay Sunset’s TCOLE reform effort with respect to sanctioning licensees for misconduct until at least 2023. Instead of proposing new laws, HB 1550 would create a “blue ribbon panel” to figure out what lawmakers need to do to reform TCOLE.

“In all of our offices, we have a lot of black binders with contents from Blue Ribbon Commissions, okay?” Committee Chair James White said to Cyrier during the April 1 hearing.

“So, what is the blue-ribbon commission, what is it supposed to be doing? I’m not going to use the euphemism kick the can down the road. But what do we need to wait on the blue ribbon commission to do,” White asked Cyrier.

“We consider ourselves a blue ribbon committee, okay? And we’re hearing – and some of these people may be in the audience, they may be on the video stream, and they’re hurting right now. So, I need to be able to explain to them: When is the kickoff of us having a restored TCOLE?” White asked Cyrier.

Of the state’s largest law enforcement associations, only one spoke out against HB 1550 during the April 1 hearing. The Combined Law Enforcement Association, known as CLEAT, told lawmakers HB 1550 is a “direct attack” on TX law enforcement and would “severely constrict” agencies if passed.

CLEAT bills itself as the “largest police officers’ union” with more than 25,000 members and is recognized one of the most powerful law enforcement lobbies in Texas.

“CLEAT has identified several portions of the bill that demonstrate a shift in TCOLE responsibilities from licensing and training, which has always been their intended duty, to an investigative agency,” Jennifer Szymanski with CLEAT’s Public Affairs said.

Szymanski told lawmakers “all of the legislation” aimed at reforming Texas law enforcement this session was an attack on “working cops” and is “punitive in nature.”

“TCOLE was designed and should continue to be the agency that oversees licensing and training,” Szymanski told lawmakers, suggesting legislators should leave investigations of peace officers to the Texas Rangers and the Texas Attorney General’s Office. Funding TCOLE should be limited to providing better training for peace officers, Szymanski argued.

TMPA’s testimony was neither for nor against the bill, but Lawrence said he and his associations more than 30,000 law enforcement members are “in full support” of reforming TCOLE in giving it more authority to regulate its licensees.

“But there’s one major caveat we throw in and that is there has to be due process involved,” Lawrence told KXAN in March. “That there has to be some process by which that thing is fully vetted, and we have determined that beyond whatever that level of proof is that we’re expecting, that that burden has been met.”

Lawmakers looking to give TCOLE more power to regulate its licensees will likely have to wait until at least the 2023 legislative session. If Cyrier’s HB 1550 passes this session, it would continue TCOLE for the next two years.

It would also allow a blue-ribbon panel to put together the plan for lawmakers to reform TCOLE, but the panel’s report would not be due until June 1, 2022.

The proposed panel would contain a majority representation of law enforcement. Cyrier’s bill calls for a 15-member panel with nine members, or 60%, described as “law enforcement industry members.”

“Certainly I agree that there’s a heavy presence of law enforcement and I hear often from the TMPA, the Texas Municipal Police Association, that they believe that there is some room for improvement,” Rep. Vikki Goodwin, a Travis County Democrat and member of White’s committee told KXAN.

“They believe that they do have some bad law enforcement officials. So, perhaps bringing them to the table and saying, ‘Look, we know we have problems. How do you suggest that we fix them?’ You know, they’re you’re there day in and day out so let us know what we can do,” Goodwin said.

“I told my staff, let’s try to help work towards better policing. I believe in the police. We need our law enforcement. But we need them to be behaving appropriately and serving, protecting the public; they should not be above the law,” Goodwin said.

If Goodwin’s bill becomes law it would also require departments to tell the state whether an officer resigned or retired while under investigation for misconduct or criminal acts.

Goodwin said the discharge information should be made public and if necessary, Goodwin would introduce legislation to open those files to the public.

The bill would also allow TCOLE the authority to revoke a license for a range of misconduct including drug use, lying in court and on reports, evidence tampering and demonstrated patterns of excessive force, abuse of official capacity, sexual harassment or sexual misconduct, and acts of discrimination.

“These things really are not behaviors that we want to see in our law enforcement. So, we wanted to spell them out and make sure that TCOLE has the ability to revoke a license of an officer who is not serving well,” Goodwin said of her bill.

Goodwin’s said Rep. White set her bill for a hearing before the House Homeland Security and Public Safety Committee this Thursday.

KXAN’s review of five years of license surrenders in Texas found what appears to be a separate justice system in Texas when it comes to criminally accused peace officers. Despite felony charges, sex assaults, manslaughter or drunken driving charges, peace officers have something to leverage other Texans do not have: a license to police.

“I think that is certainly part of the calculation when you are handling cases,” Williamson County District Attorney Shawn Dick told KXAN. “Can we trust another state entity to take care of the problem?”

Dick has faced what many prosecutors across Texas face: deciding whether to take an officer to trial or settle with a plea bargain.

That misconduct does not have to result in criminal charges or a conviction.

Georgia’s POST can open an investigation to suspend or revoke a peace officer’s license anytime an officer is terminated, resigns in lieu of termination or is demoted resulting in a loss of rank. Georgia officers can appeal. Since 2015, 636 officers filed appeals contesting a POST decision and 506 appeals were successful resulting in an officer having the POST decision on his license reversed or amended.

Despite the 80% appeal success rate, Georgia has successfully revoked 3,648 licenses since 2015. The Texas Commission on Law Enforcement does not have the authority under current Texas law to what’s done in Georgia unless an officer is convicted of a felony or high level misdemeanor.

“Juries still are very sympathetic to police officers,” former Travis County District Attorney Margaret Moore said in 2019. Moore called trying a peace officer a “huge gamble” and acknowledged what we uncovered in Texas was what it seemed: a difference between peace officers and ordinary citizens in the criminal justice system.

Now two years later, prosecutors continue to face the conviction hurdle to get problem officers out of law enforcement.

In 2016, before Dick took office, off-duty El Paso Police officer Alan Dieguez was running 100 miles an hour along Interstate 35 near Jarrell. Dieguez was drunk, a blood draw showing his blood alcohol concentration at 0.179; a level more than twice the legal limit in Texas.

After Dick took office, the grand jury indicted Dieguez on an intoxication manslaughter charge. Months later Dieguez pleaded guilty to the felony and faced up to 20 years in prison. But in a plea agreement with the DA’s office, Dieguez walked away with probation and a 120-day sentence in the county jail.