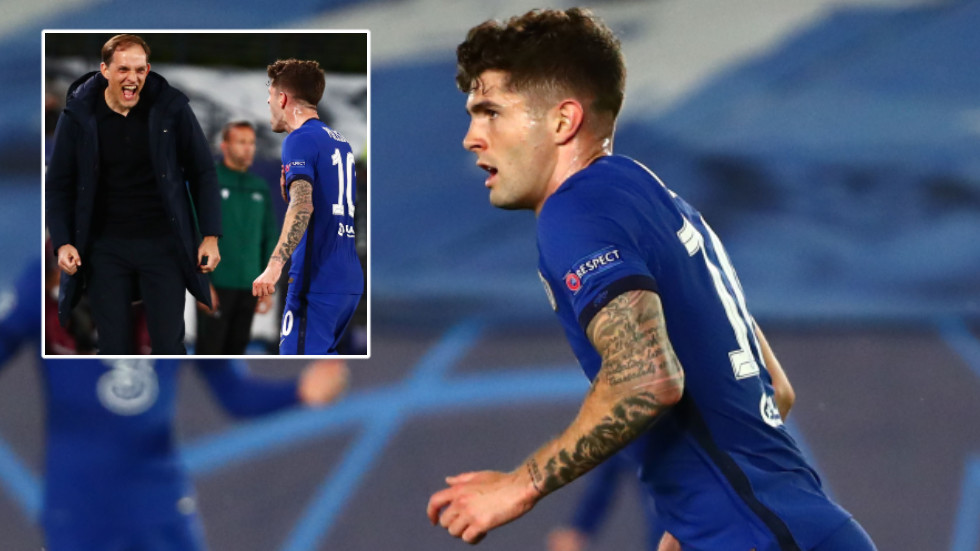 USA star Christian Pulisic’s ultra-cool solo goal made the midfield marvel the first American to score in the final four of the Champions League – and he has now scored more than any of his countrymen in the competition.

At just 22, Pulisic has now hit the net more times in the Champions League than DaMarcus Beasley, the veteran of four World Cup final tournaments for his nation and owner of 126 caps for his country.

Pulisic needed only 14 minutes to make the eye-catching breakthrough, putting Chelsea ahead in their semi-final first-leg at Real Madrid when he seized on to a perceptive long ball from Antonio Rudiger beyond the Spanish giants’ backline.

His finish belied his inexperience, taking a couple of touches to his right to create an easier angle on goal inside the penalty area before finishing precisely beyond two defenders on the line.

Despite dominating much of the opening half an hour, Chelsea were punished when they gave Karim Benzema a slither of space inside their own box 15 minutes later, the lethal Madrid marksman reacting masterfully to thump an unstoppable finish beyond Edouard Mendy.

In freakishly torrential conditions, there were fewer chances after the break, with Pulisic one of three players withdrawn at once after an hour as Chelsea’s players visibly tired following a busy recent schedule.

That took none of the shine from Pulisic’s record-breaking performance. “Hershey Pennsylvania’s Christian Pulisic becomes the first American in our nation’s history to score in a Champions League semi-final,” said prominent US football broadcaster Roger Bennett, hailing a “genuinely joyous moment for the American men’s game.” “We are becoming normalized.”

Namechecking one of the USA’s most prolific international scorers, a reader replied: “I admit he’s good but he’s no Landon Donovan – the best export that I have seen in the flesh.

I admit he’s good but he’s no @landondonovan best 🇺🇸 export that I have seen in the flesh, always welcome back at Goodison Park

Landon is one of the all time greats when it comes to USMNT .. I think if he stays healthy Pulisic will ultimately be the best US player of all time tho

“Landon is one of the all-time greats when it comes to the US Men’s National Team.

“I think if he stays healthy, Pulisic will ultimately be the best US player of all time, though.”

Pulisic continued the form that had seen him receive the most fouls since Lionel Messi in 2011 in the quarter-finals against Porto, earning the official Player of the Match award as Chelsea edged through at Stamford Bridge.

Paris Saint-Germain are also in Champions League semi-final action on Wednesday, and a fan of their women’s team pointed out that Pulisic was only the second American to score against a Spanish side at that stage of the competition in little more than 48 hours.

Not even the first American to score in a CL semifinal against a Spanish giant this week, but second is still pretty good👏https://t.co/iCmdtUMyky

The composure is amazing especially in comparison to Werner right now

On Sunday, Alana Cook scored a quickfire equaliser for the French contenders after they went behind to an early Barcelona goal in their quest to reach the final.

Another fan pointed out that Pulisic appeared to have ignored out-of-form Chelsea teammate Timo Werner, the Germany striker having already missed an excellent close-range chance by the time Pulisic showed him how it is done.

“The composure is amazing, especially in comparison to Werner right now,” they said, while another speculated: “Thought better of passing it to Werner after that first play.”

Chelsea host Madrid in the second leg next Wednesday, when a win or a 0-0 draw would guarantee them a place in the final without the need for extra-time.

Also on rt.com Not for sale: Arsenal owner Kroenke issues statement amid rumors of takeover bid by club legends Henry, Bergkamp and Vieira