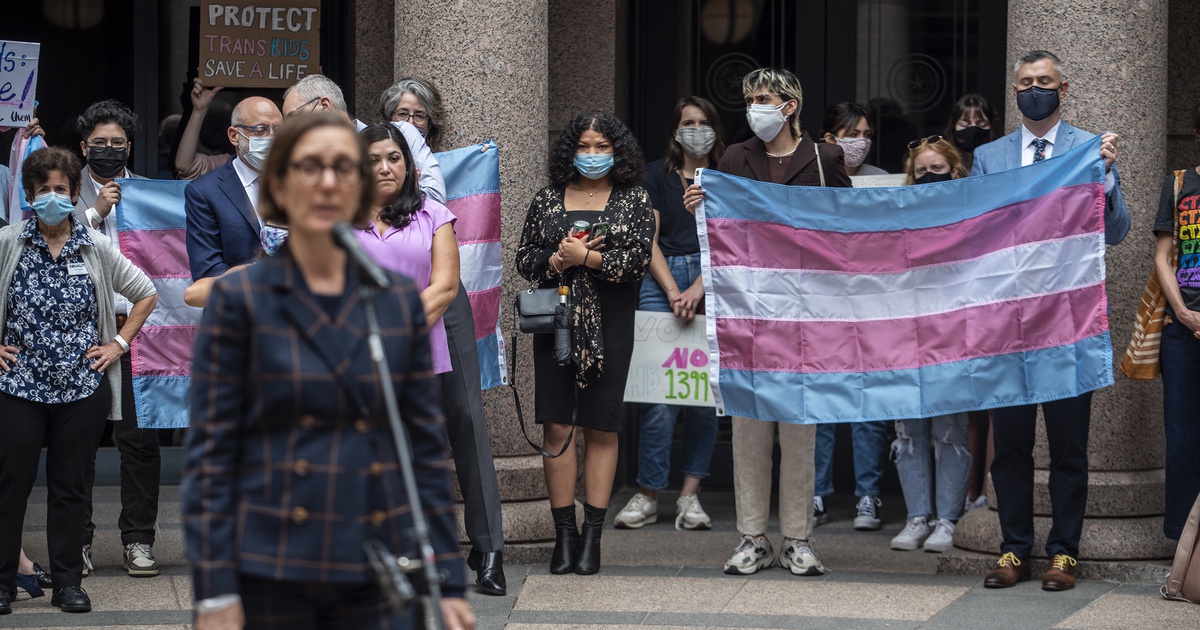 The Texas Senate tentatively approved a bill Monday in an 18-13 vote that would classify providing gender affirming health care to transgender minors as child abuse — just one of the Legislature’s many attempts to prevent transgender children from transitioning before their 18th birthday.

Senate Bill 1646 is among several other bills that advocacy groups say erode the rights of transgender Texans. Authored by Lubbock Republican Sen. Charles Perry, it amends the definition of abuse under Texas Family Code to include administering or consenting to a child’s use of puberty suppression treatment, hormones or surgery for the purpose of gender transitioning.

But it’s unclear what the legislation’s chances are in the House, where another major bill targeting transgender children appears to have stalled.

In a Senate committee hearing, SB 1646 attracted over four-and-a-half hours of public testimony from LGBTQ Texans, their parents and several state and national medical associations opposing the bill’s intrusion into intimate medical decisions. Social workers also testified the bill could put more transgender children into the foster care system, where they face elevated rates of suicide and depression.

Perry argued in floor debate that the bill was necessary to prevent children from making irreversible decisions that they may regret later, but experts say both of those claims are questionable.

According to Marjan Linnell, a general pediatrician, puberty suppression treatments are completely reversible and have been used for decades to delay early onset puberty. While other treatments such as hormones and surgery may cause irreversible changes, Linnell said the risks are discussed extensively with children and their parents before the procedures, which is typically only performed after puberty.

Research also shows that children typically solidify their gender identity around age 6 to 7, according to past Texas Psychological Association President Megan Mooney. In committee hearing and floor debate, legislators and invited experts claimed the many transgender children ceased to experience gender dysphoria later in life. However, many of the studies they cited have been widely critiqued for casting wide nets for participants that often include children who may act gender non-confirming — for example, Linnell explained, a young girl who enjoys playing with trucks — but do not identify as transgender.

A 2021 study by the Fenway Institute and Massachusetts General Hospital found that only 13.1% of transgender people have detransitioned at some point, and 82.5% of those cases were caused by external pressure and stigma related to being transgender rather than regretting their transition.

The Senate is set to take their final vote on the bill Wednesday. It previously passed Senate Bill 29, legislation that would force transgender students to participate in school sports based on the sex originally labeled on their birth certificate.

That bill has been sitting in a House committee since the Chair Harold Dutton, D-Houston, told the Houston Chronicle its identical House companion bill likely didn’t have the votes to make it to the full lower chamber.

Angela Hale, senior adviser for Equality Texas, is glad that House committee doesn’t support the bill and said that the conversation about restricting transgender Texans’ rights should have been left in 2017 with the death of that year’s so-called “bathroom bill,” which would have restricted public restrooms transgender Texans could use.

“We ask the legislature, and especially leaders in the Texas House, to once again reject this and all unnecessary and harmful legislation and focus on issues that unite us as Texans,” Hale said.

In the Senate, both the floor vote and committee vote on SB 29 were split directly down party lines, with every Republican voting for and every Democrat voting against. In both cases, Republican majorities pushed the bill forward despite backlash from LGBTQ Texans and business leaders.

But once the bill reached the house, Speaker Dade Phelan, a Beaumont Republican, assigned the Senate bill to the Public Education Committee instead, where its House companion had been sitting since the end of March. The day after SB 29 was assigned to the committee, House Bill 4042 was heard by the committee’s six Democrats and seven Republicans.

If the House bill had gone through the State Affairs committee like its Senate equivalent, it would have faced a 8-4 Republican majority. Instead, it went before what Houston Republican Rep. Dan Huberty, who was arrested on suspicion of driving while intoxicated Saturday, called “the most bipartisan committee we have in the Texas House” during the hearing.

However, Phelan, who assigns bills to committees, may have difficulties making the same maneuvers for other bills, like SB 1646.

The Speaker did not return a request for comment, but previously told Texas Tribune CEO Evan Smith in a podcast interview last session that he didn’t support bills “bashing” LGBTQ Texans.

Last week, the House Public Health committee, made up of six Republicans and five Democrats, narrowly passed a bill that would ban children from receiving gender affirming medical care, such as puberty suppression treatments or hormones. That bill hasn’t yet come up on the House floor.

Opposition to the sports ban also didn’t pertain entirely to how it would affect transgender students. Huberty pointed out in committee hearing that the bill is nearly identical to current University Interscholastic League rules.

“I’m trying to figure out why we continue to pass bills that we don’t need bills for,” he said in the hearing.

Even if the bills pass through committee and floor votes in each house, they’ll still need to be signed by Gov. Greg Abbott to become law. Kansas Gov. Laura Kelly vetoed legislation that would ban transgender women from school sports, and Arkansas Gov. Asa Hutchinson vetoed another piece of legislation that would ban gender affirming medical care for transgender youth. Hutchinson’s veto was later overturned by the Arkansas legislature.

In 2017, Abbott placed a controversial “bathroom bill” on his legislative priorities for the session which would restrict transgender Texans’ access to public bathrooms. That bill died before reaching the House floor. But in 2018, a Republican state legislator alleged that Abbott may not have supported the bill after all, saying he “did not want that bill on his desk.”

Yet Abbott in 2019 also gave credence to a father’s claim that his ex-wife was committing child abuse by supporting their child’s gender transition. In a 2019 tweet, Abbott said the issue would be looked into by the Texas Attorney General’s Office and the Texas Department of Family and Protective Services.

In response to the case, State Rep. Steve Toth, R-The Woodlands, said in a since-deleted tweet “the 1st bill I file in the 87th [legislative session] will add ‘Transitioning of a Minor’ as Child Abuse.” Toth is the author of House Bill 2693, legislation that would mandate the Texas Medical Board to revoke the medical license of any physician or health care provider who performs or prescribes gender affirming medical care. That bill has been sitting in the House Public Health Committee since March 17 and has yet to receive a hearing.