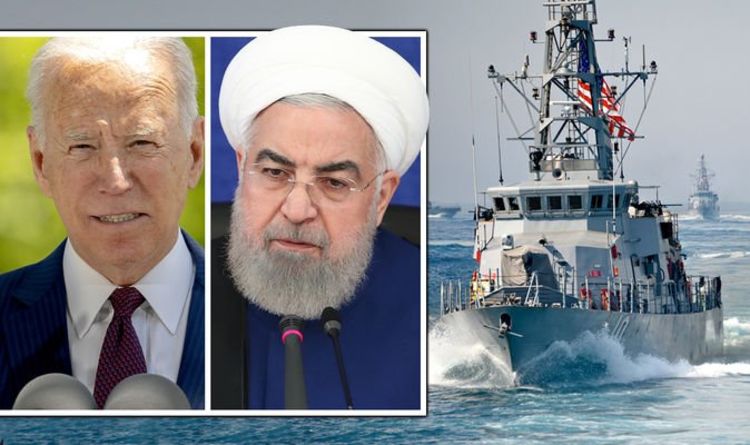 The US Navy said Iranian vessels charged at two American ships in the Persian Gulf on Monday. The incident forced the US to act, with one warship firing warning shots at the Iranian boats. During the incredibly close encounter – which could have resulted in a collision, the US Navy said the Iranian boats came just “68 yards” away from both American ships at one point.

In a statement, the US Navy said that at 8pm on April 26, three Iranian Islamic Revolutionary Guard Corps Navy (IRGCN) fast inshore attack craft (FIAC) “failed to exercise due regard for the safety of other vessels”.

They added the vessels came in “close proximity to US naval vessels” in the international waters of the north Arabian Gulf.

The US Navy said the vessels approached the US Navy patrol coastal ship USS Firebolt (PC 10) and US Coast Guard patrol boat USCGC Baranoff (WPB 1318) to an “unnecessarily close range” – with the closest point of just “68 yards” to both American ships.

A statement read: “Firebolt and Baranoff were conducting routine maritime security operations in international waters during the time of the incident.

“The US crews issued multiple warnings via bridge-to-bridge radio and loud-hailer devices, but the IRGCN vessels continued their close-range maneuvers.

“The crew of Firebolt then fired warning shots, and the IRGCN vessels moved away to a safe distance from the US vessels.”

The US Navy said throughout the incident, forces tried to “reduce the risk of miscalculation, avoid a collision, and to de-escalate the situation”.

They added: “The US is not an aggressor; our naval forces remain postured in a non-provocative manner that exemplifies professionalism, incentivizes adherence to international law and customs, and persuades others to emulate our actions.

“Our forces are trained, however, to conduct effective defensive measures when necessary.”

In the statement, the US Navy said their forces will “continue to remain vigilant” and that “commanding officers retain the inherent right to act in self-defense”.

They said: “The Firebolt and Baranoff crews operated with distinct professionalism, superior seamanship and dispassionate yet firm resolve.

“As professional mariners, we expect the IRGCN to operate with due regard for the safety of all vessels as required by international law.”

Similar close incidents have taken place in the region over the past five years.

It comes as world powers are trying to bring the US and Tehran closer together to reestablish the 2015 Iran nuclear accord.

Iran, Britain, China, France, Germany and Russia began new meetings to try to agree to steps that would be needed if the agreement is to be revived.

As talks finished last week, the US and its European allies said serious differences still remained despite some progress.