Why you shouldn't mow the lawn in May – What... 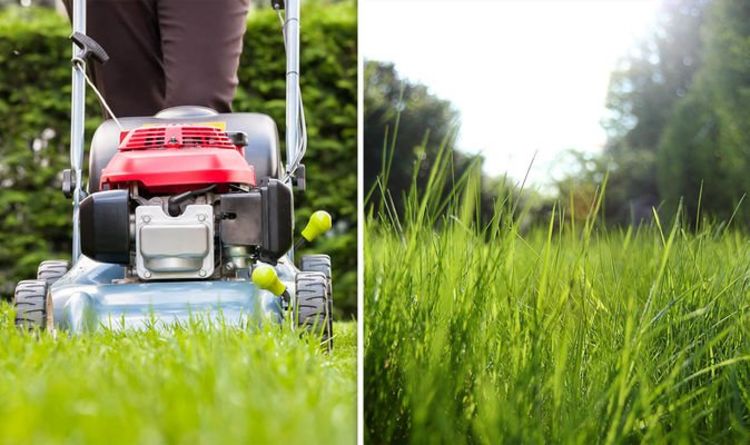 Mowing your lawn is an essential job for every gardener as grass and flowers appear to grow at a rapid pace during the Spring and Summer months. Mowing is the key to a healthy lawn, encouraging a lusher crop of grass. Cutting the grass is a timely task each season and must be undertaken on several occasions to maintain a tip-top lawn. However, mowing your lawn in May is banned for many as gardeners strive to help nature in another way.

Each year a campaign called No Mow May launches for the month of May.

The initiative is set like a challenge, such as the no-makeup photo or the ice bucket challenge, which is endorsed by many plant enthusiasts.

All you have to do to participate is let your lawn grow for the entire month of May.

Several nature charities, including Plantlife, endorse the campaign, urging people with gardens to leave their mowers in their sheds until June.

READ MORE: When to start watering garden plants in spring

The impetus behind No Mow May is to give pollinators, like bees, more time to undertake their work.

Postponing your mowing session until June can help plants create enough nectar for up to 10 times more beers and other pollinators.

At the end of the month, you can count the flowers on your lawn to take part in the conservation charity Plantlife’s Every Flower Counts survey.

You will then receive your own Personal Nectar Score, which tells you how many bees your garden is helping to support.

Recent research found there is a huge diversity of wildflowers currently growing in British lawns.

More than 200 species have been found flowering on lawns, including rarer flowers such as meadow saxifrage, knotted clover and eyebright according to a large survey from Plantlife called Every Flower Counts.

The most abundant flowers in British gardens are daisies, white clovers and selfheals.

The survey found 80 percent of laws supported the equivalent of 400 bees a day from the nectar sugar produced by flowers.

But 20 percent of lawns were found to be supporting 10 times as many – which equates to up to 4000 bees a day.

This year, the Every Flower Counts survey will take place from May 23 to 31. To join you simply need to count the number of flowers in a random square metre of your lawn.

He said: “All the nectar is available to a huge range of pollinating insects – from flies and beetles to butterflies and bumblebees.

“With a third of wild bees and hoverflies in decline, Every Flower Counts shows the vital difference everyone with a lawn can make by supporting these pollinators by cutting back on the mowing.

“Between 1980 and 2013, every square kilometre in the UK lost an average of 11 species of bee and hoverfly, so the dense patchwork of lawns provided by British gardens really can throw our pollinators a lifeline. We just have to let the flowers bloom.”

How many species pollinate flowers?

Bees are the most renowned species of insect pollinators, but the UK has at least 1,500 species of these creatures.

Other species include hoverflies, wasps, flies, beetles, butterflies and moths.

In addition, there are about 270 types of bee in the UK, among which there are 24 species of bumblebee.

How to help pollinators

In addition to No Mow May, you can undertake some of the following to help pollinators in your garden:

Grow your own fruit and vegetables which require pollinators to provide seeds and fruit.

Create a little home for bees, including a patch of bare earth somewhere flat and sunny on a south or eastern-facing bank for the solitary mining bee.

Remove weeds in your garden manually and try to avoid using harsh chemicals and pesticides.