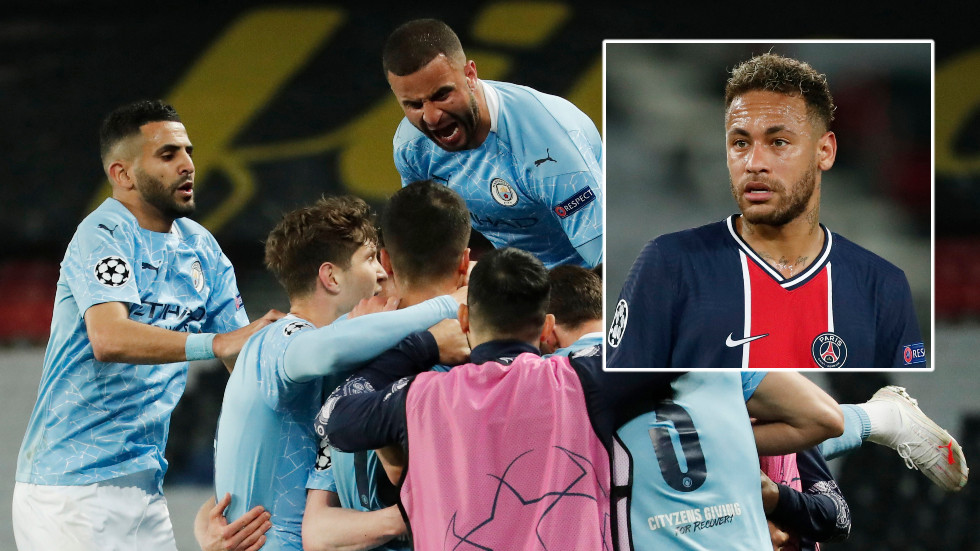 Manchester City turned the first leg of their Champions League semifinal around to take a huge step towards the final, scoring twice through Kevin De Bruyne and Riyad Mahrez to go in front in Paris before Idrissa Gueye saw red.

Paris dominated the first half at the Parc des Princes, faced with the challenge of reaching the final for a second consecutive season after beating holders Bayern and five-time winners Barcelona in the previous round, and went ahead after 15 minutes.

Angel di Maria – familiar with City from his season with Manchester United in 2013 – whipped a corner towards the near post, where captain Marquinhos flicked a header beyond Ederson to give his side a lead that they were well worthy of for the remainder of the half.

The runaway Premier League leaders were revitalized when they re-emerged, taking the lead when Player of the Match De Bruyne curled one of his characteristically evasive deliveries into the penalty area, beating the Paris backline and, finally, surprised goalkeeper Keylor Navas.

47 – In the history of the European Cup/UEFA Champions League, there have been 47 instances before tonight of an English side winning the first leg of a two-legged knockout tie away from home, and on all 47 occasions the English side has progressed. Legwork. #UCLpic.twitter.com/QtWjT41QK8

That gave City the momentum going in to the final 25 minutes of normal time, taking advantage when Mahrez measured a free-kick from a central position between two players in the PSG defensive wall and beyond Navas at his left-hand post this time.

PSG have now lost important home games to City, Marseille, United, Monaco, Lyon, Nantes, Lille and Bayern this season, and star striker Neymar has not scored in his last six games in the knockout stage in the Champions League, although they will remain optimistic ahead of the return leg in Manchester next week.

To compound their despair, midfielder Gueye was dismissed for a dire 77th-minute challenge on Ilkay Gundogan, threatening to badly damage the City playmaker’s ankle with a wincingly late attempt at a tackle.

“We started well in the first ten minutes and had some control but they are an unbelievable team with great quality up front,” De Bruyne told BT Sport afterwards.

“It was a shame the way we conceded. After 25 minutes we changed our press and it became better, and the second half was much, much better. In the first half we were too rushed, and that’s not the way we are set up as a team.

“In the second half we tried to find the spaces more patiently. The progression we made as a team was good.”

The usually-lethal Kylian Mbappe failed to register a single shot after starting a Champions League match for the first time in his career.

“I am satisfied with the performance,” said City boss Pep Guardiola, wary of the particular threat posed by Mbappe and strike partner Neymar.

“We still have 90 minutes to beat them and against a team like PSG anything can happen.

Everything is still possible in this semifinal.After victories in Barcelona and Munich, there is all to play for. Paris can believe in its strengths. More than ever, 𝐀𝐋𝐋𝐄𝐙 𝐏𝐀𝐑𝐈𝐒🔴🔵 pic.twitter.com/0e8q8AGY38

1 – Paris Saint-Germain attempted just one shot in the second half against Manchester City, the fewest they’ve had in a single half in a UEFA Champions League match since April 2016, also against Man City (one in the first half). Lacklustre. #UCL

“For a lot of our players it was the first time in the semifinals so they wanted to do well. The last ten minutes of the first half was good, and the second half was excellent.

“We scored two goals away and that is so important, but we have a hard job to do in six days.”

English teams now look marginally more likely to make up the finalists after Chelsea drew 1-1 at Real Madrid in the other semifinal first leg on Tuesday.