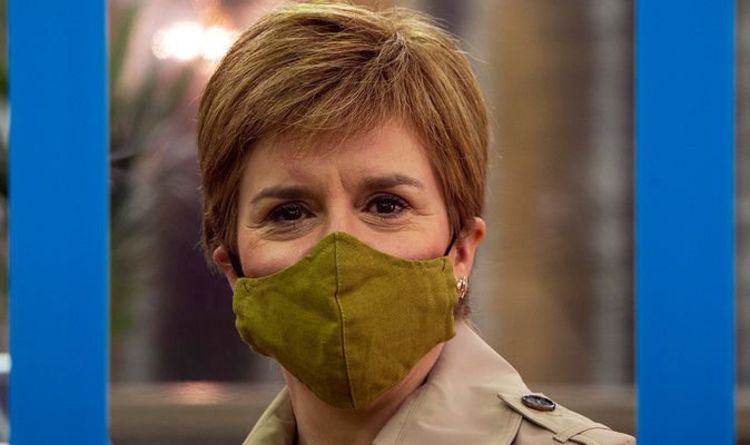 The SNP, Scottish Greens and Alex Salmond’s Alba are all in favour of an independent Scotland. Unionist group Scotland Matters is urging tactical voting to confront the threat.

The Scottish Conservatives, Scottish Labour and Scottish Liberal Democrats are all pro-union but are strongest in different regions.

Scotland Matters wants unionist voters to lend their votes to the party most likely to beat the SNP in their area.

New billboards have been erected in Edinburgh, Glasgow and Aberdeen warning of a nationalist majority.

The billboards portray Nicola Sturgeon being controlled by Mr Salmond like a puppet on a string, with the SNP leader in turn directing Scottish Green leader Patrick Harvie.

A spokesman for Scotland Matters commented: “The most recent billboard in our ongoing series sees three of the independence movements most ardent adherents strung together in an obsessive performance above Scotland, while the nations essential services, private businesses and critical infrastructure is neglected once again.

“Salmond, Sturgeon and Harvie’s mono-obsession with independence has kept Scotland stuck in limbo for what is now approaching a decade, while repeatedly treating the issues that all Scots want Holyrood to concentrate on as a mere puppet show: post-covid recovery, economic development, the NHS and the environment.

“If pro-indy parties secure a majority on May the 6th all Scotland can look forward to is further division, decline and the constant threat of Scotland seceding from one of the world’s most successful and long-lasting unions with the other nations of the UK; thus why Scotland Matters supports tactical voting in the forthcoming election.”

Scottish Parliament elections take place on May 6 with the SNP demanding another referendum on leaving the UK.

It found concerns over a hard border with England, the currency and coronavirus vaccines helped fuel a unionist revival.

However, it also showed the SNP remaining the most popular party in Scotland and its supporters are the most likely to vote next month.

The party won’t stand for individual constituencies, so it doesn’t risk losing the SNP seats, but will have regional candidates.

Ms Sturgeon has said she will refuse to work with Mr Salmond.

Some SNP figures have suggested a referendum could take place after the election even without the British Government’s consent.

Should this happen Scottish Tory leader Douglas Ross is urging unionists to boycott the poll.

Scotland voted to remain part of Britain in 2014 by 55 percent to 45 percent.