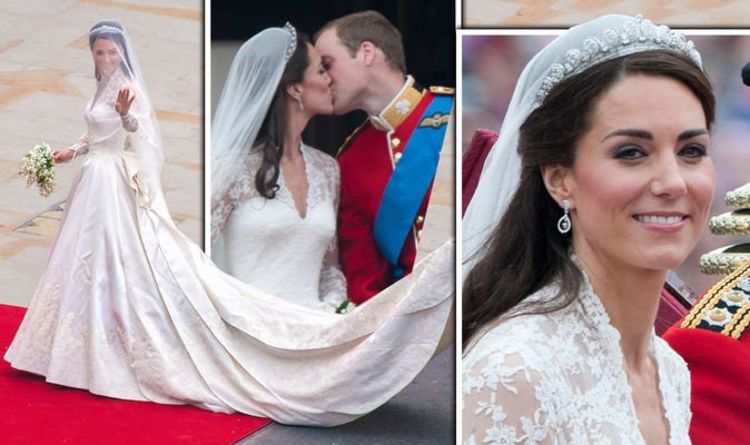 The Duke and Duchess tied the knot in 2011 when they married in Westminster Abbey. The couple met previously while studying at the University of St. Andrews and William popped the question to Kate while on a holiday in Kenya.

The bodice, skirt and underskirt train were all created out of English and French Chantilly lace.

The French Chantilly lace was the only fabric not sourced or supplied by a British company.

It is thought that her dress could have been worth up to an eye-watering £250,000.

The Duchess’ wedding shoes were also hand-made by the team at Alexander McQueen and were made of ivory duchess satin with lace hand-embroidered by the Royal School of Needlework.

For the “something borrowed” part of her special day, the Queen generously loaned Kate a stunning Cartier tiara.

Known as the Cartier Scroll tiara, the diadem was purchased by King George VI, Elizabeth’s father, for the Queen Mother in 1936.

It was later given to the current monarch by the Queen Mother on her 18th birthday.

The tiara rested on Kate’s veil, which was made from layers of soft silk and featured hand-embroidered flowers.

Kate kept her jewellery fairly simple on her wedding day, letting the stunning dress do the talking.

Instead of wearing a necklace, the royal made a statement with her stunning drop earrings.

The earrings, made by Robinson Pelham, were diamond-set stylised oak leaves with a pear shaped diamond set drop and a pavé set diamond acorn suspended in the centre.

Inspiration for the design came from Kate’s family’s new coat of arms, which includes acorns and oak leaves.

The earrings were made to echo the tiara and came as part of the “something new” element of her big day.

They were a personal gift to Kate from her parents for the wedding day.