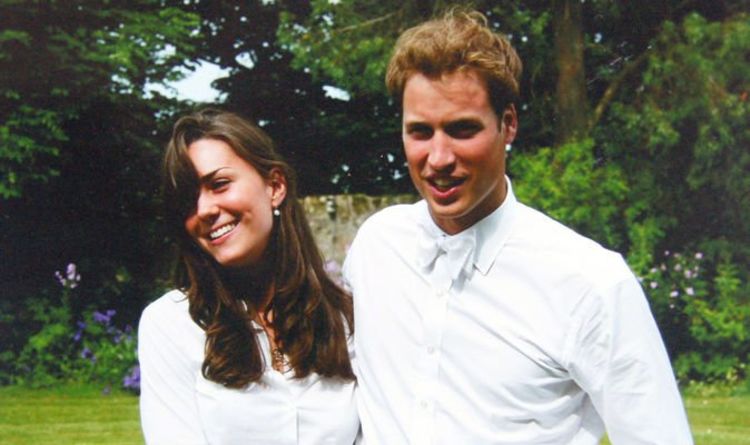 The first official image of the now-Duke and Duchess was shared by Clarence House. It was taken at St Andrew’s University in St Andrew’s on June 23, 2005 in Scotland on the day of Kate and William‘s graduation.

It shows the couple, both in white shirts, posing together to celebrate leaving university, both in their early 20s.

While neither could have predicted the future, they appear loved up in the snap, a positive omen for their long and happy relationship, and their shared parenthood.

The picture was taken by Kate Middleton’s parents and has now been analysed by body language expert Judi James.

She claimed the couple appears totally in love in the snap.

She highlights the couple’s physical closeness, which we see much less during their official royal engagements.

Judi said: “He and Kate are welded together at the ribs, with this torso-pressing suggesting strong physical bonding and attraction.”

While William is one the with all the royal status, it’s Kate with the confidence, Judi claims.

“Kate’s dimpled smile and her head tilt suggest higher levels of confidence than William here, almost as though she is initiating him into the world of relaxed, tactile PDAs.”

The future Duchess of Cambridge shows a little possessiveness over William, Judi claims.

“Kate’s hand laid flat on William’s midriff forms a possessive, ownership ritual, suggesting she is totally sure about her choice of partner,” she said.

However, a young William seems a little “wary” the expert suggests.

“William has laid his own hand over hers, signalling a slightly wary endorsement of those feelings.”

Judi claimed Kate’s playful side may help husband William recover from losing his brother Prince Harry to the States following his and Meghan Markle’s departure from the firm, Judi claimed.

She added: “Their displays were often aimed at amusing their hosts but they also appeared to be having fun as a couple.”

“There is also a suggestion that Kate’s displays of playful, shared fun might be helping William to repair from the loss of his ‘fun’ younger brother.”