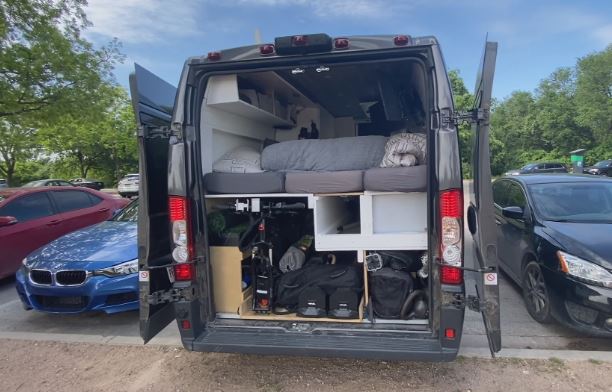 AUSTIN (KXAN) — More people are renting and buying RVs than ever before, and there are no signs this trend will slow down as travel starts to pick up.

“My goal is to go to every state and national park,” said Scotty Carlisle, who was spending his Thursday afternoon working from Zilker Park out of his van.

“You don’t know what you have until you’ve lost it,” said Carlisle.

Being cooped up for months gave him time to reflect and think about what he wanted to do with his life. So, he sold most of his possessions, including his home, and bought a customized van.

“It definitely gave me a new perspective on social interactions and enjoying the outdoors and travelling and things like that,” Carlisle said.

RELATED: Learn How Easy It Is To Book With RVshare

The “RV Life” has grown very popular throughout the pandemic. Some people choosing to rent an RV, but others purchasing them.

“It is so easy, it is affordable, it is very safe,” said Jennifer Young with Outdoorsy, a company that allows people to rent RVs.

According to KOA’s 2021 North America camping report, more than 48 million U.S. households camped at least once in 2020, while the number of households that own RVs grew by 2.6 million. Now 9.6 million households across the nation own RVs.

Young says Outdoorsy has grown significantly during the pandemic with more people wanting to get out and about.

“We see a lot of people wanting to spend more time outdoors and also interestingly the way the world and this country is looking at how you work and how you live is also changing,” said Young.

For Carlisle that means working wherever he thinks is the best spot, sometimes from a beach or even the mountains.

“I am a cybersecurity systems engineer, I work full-time remote and doing it from Zilker Park is pretty nice,” Carlisle said. “I was really wanting to travel and save money and a van is the best way to do both those things.”

Renting an RV is easier than ever, especially on sites like Outdoorsy, where customers can rent an RV or put their own RV online to be rented by someone else.