Manchester United boss Solskjaer hits back at Scholes and Hargreaves... 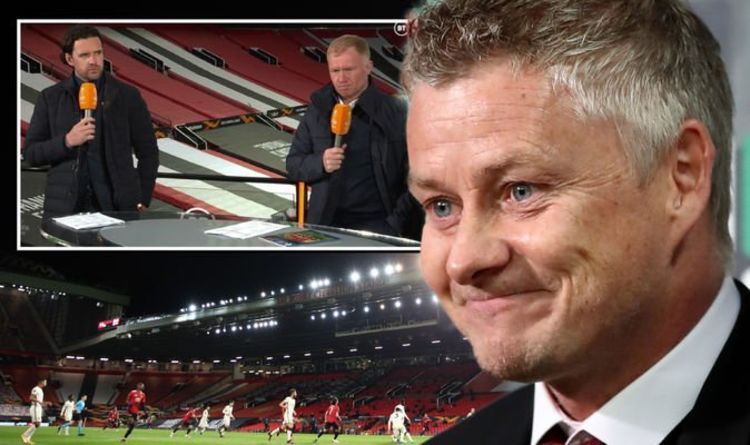 Manchester United boss Ole Gunnar Solskjaer has spoken out after his side’s 6-2 win over Roma on Thursday night. The Red Devils went into the game looking to take a giant step towards the Europa League final. And they did just that, overcoming a poor first half to claim victory under the lights at Old Trafford.

Manchester United took the lead against Roma through Bruno Fernandes in the ninth minute.

The Portugal international opened the scoring via a deft chip after some superb work from Paul Pogba and Edinson Cavani in the build-up.

However, United were then rocked when Roma found the net twice through Lorenzo Pellegrini and Edin Dzeko.

Those strikes saw ‘#Oleout’ trend on Twitter but, after the interval, the Red Devils were a side completely transformed.

Cavani scored twice, Fernandes notched another while Pogba and Mason Greenwood were also on target to ensure they travel to Rome for the return leg with a significant advantage.

And Solskjaer has now spoken out after the game.

When told Owen Hargreaves and Paul Scholes felt he should have made changes at the break, the 48-year-old hit back by saying: “It’s easy up there thinking who should play… but who should not play?

“Mason Greenwood should be disappointed not to be playing but it’s about balance. Maybe those two should try to leave players out and pick a team with balance.

“We know we have got creative players who can create big moments.

“Paul Pogba’s position today was very good in that position, he’s allowed some freedom. He’s got the foundation behind him. The difference today is we took most of our chances.

“The character showed that they came back and didn’t lose their heads.

“Maybe five or 10 minutes at the end of the first half, we didn’t look great but we got ourselves together. The two goals are junior, schoolboy errors that shouldn’t happen at this level.”

Solskjaer insists the job isn’t done yet, despite now having a big advantage.

He added: ”No I don’t feel the job is done but it was a good job done. We did well but we know they have quality.

“They scored two goals from the two chances we gave them. They didn’t have loads of chances against Ajax.

“The second half was very good.”

Pogba also reacted to the result and expressed his unhappiness at giving a penalty away.

“It’s unlucky. I’ve been unlucky a lot this season with penalties.”

He also shed light on Solskjaer’s team talk at half time, admitting the Norwegian sparked them into life.

“The result is positive but it’s not finished,” continued the France international.

“We will have to say focused and play a nice game with the same mentality.

“In the first half we had two mistakes and conceded two goals. We were a bit all over the place after the second goal.

“At half-time we said let’s do the right things, let’s do simple things. The manager spoke. We were all motivated to score as many goals as possible.”

“He was sensational. As you say, an all round centre-forward performance,” he said.

“You’ve seen your Marcus, your Mason, your Martial – we’re not quite sure they’re centre-forwards. Tonight that tells you, that is a real centre-forward up there.

“Led the line, brought players into play, great pass. Two brilliant goals. What a brilliant finish the first one was. Gave the keeper no chance.

“And a sniffers goal as well. It was a brilliant all round performance. Just disappointed he didn’t get the hat-trick really.”

And he also hailed Pogba by saying: “I thought Pogba was outstanding tonight. From that position it’s a position where you can create, score goals.”

“This position is perfect when you want to be a bit of a maverick. Have a free role in your team, you can do it from that side.”