Martin Compston endured 'miserable' time in lead up to Line... 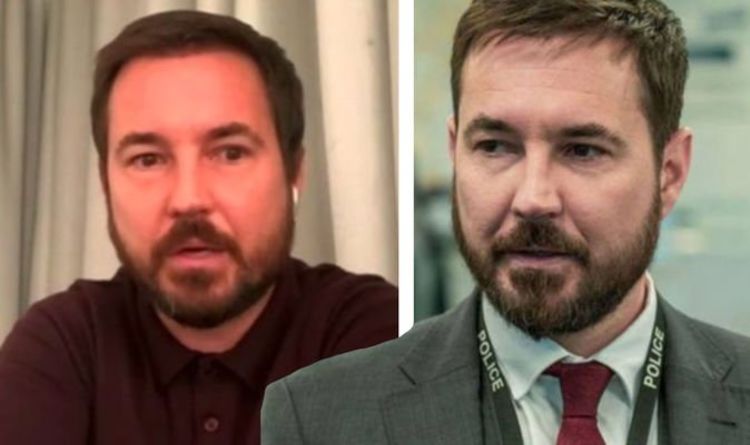 The new series of Line of Duty has been a complete whirlwind for fans of the show, with the highly-anticipated final airing on Sunday. Ahead of the last episode, stars of the BBC show Vicki McClure and Martin Compston, discussed the fan reaction and backstage gossip behind the sixth season, with the latter revealing he struggled to get into his character’s suits after putting on weight during lockdown.

The third UK lockdown seemed to be a tough one for many of us, with the winter days and dark evenings making it more tedious than ever.

And for Martin, it’s been quite a turbulent time as he had to put himself through a “miserable” couple of weeks of dieting in order to fit back into his alter-ego Steve Arnott’s swanky suits.

Chatting on the Jonathon Ross show which airs on Saturday, Martin described the AC-21 officer as “the overdressed w****r in the call centre”, among other things.

“[I’d] Just finished filming The Nest. Had my top off a fair bit in that!” he tells the host about his latest BBC thriller, before moving onto the sizing drama.

“I’m usually a 32 [chest], got down to 30, now I’ve got these tailored suits for Line of Duty. We start filming, lockdown happens, up to about a 34…” he explains his fluctuating weight.

He laughs: “I couldn’t get them on. I couldn’t even get the shirts buttoned.

But tight suits or not, Martin is still very much on thousands of fans radar for romance, as he discusses some of the very personal messages he receives regularly.

The Scottish actor also has to master the cockney London accent, something he admits he finds really difficult.

“It can be hard, that dialogue on its own would be hard anyway, throw the accent in there,” he explains, referring a 30-page scene they filmed where he was trying to remember his lines as well as juggle the accent at the same time.

“When we’re away from it for a long time, when I do that voice I can hear him, it’s like a costume.”

As a way to tackle this issue, the BBC star reveals he has someone record his lines for him to listen to, a savvy coping mechanism that works a treat.

“I walk about all day with him in my ears. It’s just graft. I’m not naturally good at accents,” he smiles.

“I need to work harder, which then makes me better because I’m not complacent with it.”

He confesses it’s “intimidating” working with his “amazing” co-stars without throwing the accent into the mix, but all that hard work doesn’t go unnoticed.

He adds: “Speaking to the wife and stuff I’ll drop it, I very much stay in it [on set].”

The Jonathon Ross Show airs Saturday at 9.35pm on ITV and the finale of Line of Duty series six airs on Sunday at 9pm on BBC One.