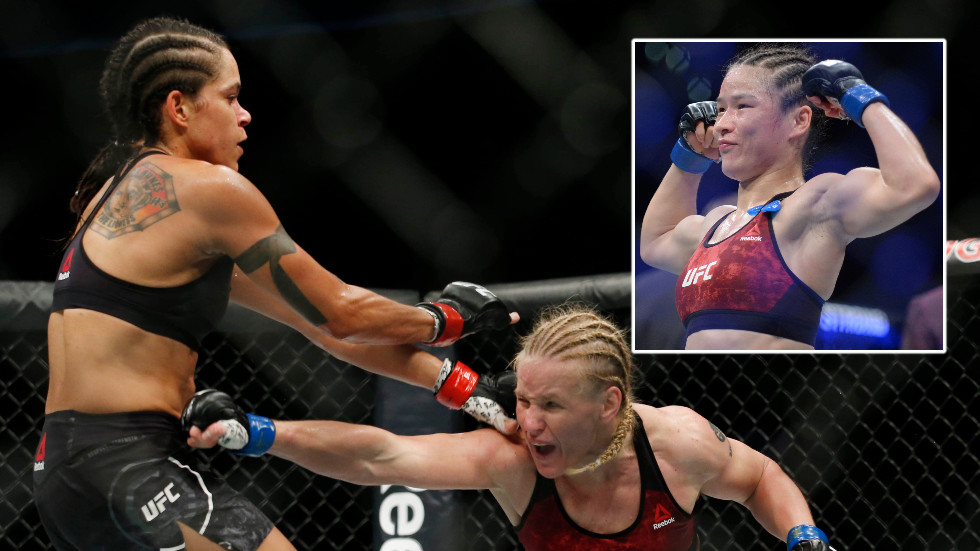 Fresh off a sensational win over Jessica Andrade at UFC 261, flyweight champion Valentina Schevchenko is eyeing fights with two-division champion Amanda Nunes in a trilogy bout or the recently dethroned Zhang Weili.

Of the two prospective punch-ups, it seems that MMA enthusiasts should not get their hopes up about the Kyrgyzstani-Peruvian facing her two-time Brazilian nemesis Nunes any time soon if president Dana White has anything to do with it.

Broached on the subject of a superfight between the two brawlers, UFC supremo White insisted they should have “their own legacies”.

“They fought a couple of times,” White told MMA Junkie after the sold-out Jacksonville card. “People can think whatever they want. There’s always going to be somebody else coming up [to challenge Shevchenko].

“There’s always a new contender. It’s not Valentina’s fault that she’s one of the all-time baddest women on this planet. So making her move up to 135 pounds just doesn’t make sense when she did it twice,” he added, in reference to Shevchenko challenging for Nunes’ bantamweight strap.

Admitting that it’s “not something” he is thinking about putting on, White revealed that he’d try to make a meeting happen if both of the fighters expressed a preference to face one another in the octagon.

Shevchenko echoes his sentiments. “If everything is going to be the same way [and] she continues to be successful and for me it’s the same, it’s going to happen naturally, without someone forcing it,” Shevchenko told MMA Junkie of a third clash with Nunes.

“When… this is the only one fight to make happen, I think it’s going to be even bigger then.”

Asked when she would fight again, Shevchenko answered: “End of summer”.

“I think that way I will have time to travel, to discover more places [and have] more interesting stuff to do and then prepare for the fight,” she went on, while opening the door to taking on recently-dethroned strawweight queen Zhang Weili.

Also on rt.com Dazed Zhang DEMANDS TO FIGHT ON despite being felled with brutal head-kick KO in title defeat to Namajunas at UFC 261 (VIDEO)

“If she wants to go to 125, who can stop her? Nobody can stop her. It’s her decision. It’s the same with Jessica Andrade.

“But she will have to have her fight to claim she’s ready for a title fight. This is how it’s supposed to be – but yeah, [I’m open to it].

“I assume she’s going to have a rematch with Rose [Namajunas] so that is what is going to be the next step. And after that, it is probably going to be something they will think about.”