The manufacturing and services sectors in China slowed their expansion in the first month of the second quarter, as companies faced supply and logistics problems.

The official manufacturing purchasing managers’ index (PMI) fell to 51.1 in April from 51.9 in March, the National Bureau of Statistics (NBS) said on Friday. While a reading above 50 reflects growth in factory output, it was lower than economists’ expectations, with polls of analysts by Reuters and Bloomberg both having predicted a slight drop, to 51.7 and 51.8 respectively.

China’s official non-manufacturing PMI, which reflects sentiment among larger businesses in the service and construction sectors, also fell short of the forecast. The reading fell to 54.9 in April from 56.3 a month earlier, dragged down by construction activity. 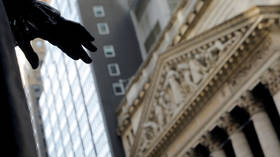 The official noted that, despite the slower pace of growth in the manufacturing sector in April, it still performed better than during the same period in 2019 and 2020.

The results of the official PMI were worse than the findings of the Caixin/Markit survey, which reflects sentiment among smaller firms. The private survey, released on Friday, showed that manufacturing PMI rose to 51.9 in April from 50.6 in March.

“The reading was the highest this year, indicating an accelerated recovery of manufacturing activity,” senior economist at the Caixin Insight Group Wang Zhe was quoted as saying by the South China Morning Post.

While the private survey showed that both output and new orders expanded at the fastest pace this year, it also revealed that manufacturing costs rose dramatically. According to Wang, this was due to increased prices for raw materials, including industrial metals. The rising prices may impede further economic recovery, he noted.

Earlier this month, China said that its economy had expanded by 18.3% in the first three months of 2021. The record growth came a year after the coronavirus outbreak paralyzed the world’s second-largest economy. Analysts now forecast the Chinese economy to grow more than 8% this year, well above Beijing’s GDP growth target of around 6%.