Jeffree Star Fans Think Kim Kardashian Looks Like Him After... 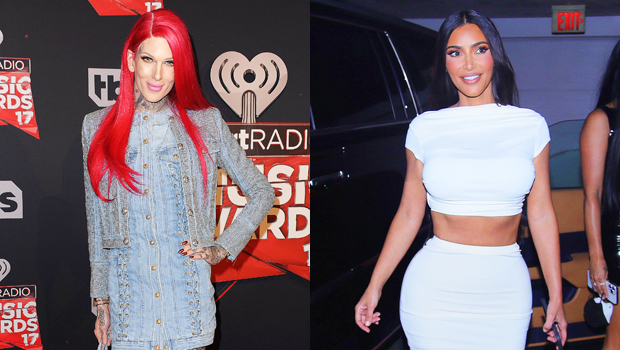 Kim Kardashian has bleached her eyebrows for a new photoshoot, and fans think she resembles embattled YouTuber Jeffree Star.

Kim Kardashian was practically unrecognizable in new snaps taken at a photoshoot on April 29. The reality star turned makeup mogul showed off her bleached eyebrows, which were part of a very unique look. “So it’s really cute, guys. My bleached brows, I’m into it. Can’t wait to show you guys the final look,” she said on her Instagram Story. Kim also rocked a blonde wig as she headed to the photoshoot, however her eyebrows were swiftly dyed back to their natural brown color, and she took off the blonde wig.

She turning into Jeffree star to win back Kanye💀 https://t.co/6rpXJ3Liw6

“I’m back to dark already don’t worry,” she captioned a mirror selfie of herself. Hilariously, fans on Twitter compared the bleached look to embattled YouTuber Jeffree Star, who is known for rocking extreme looks. “She turning into Jeffree star to win back Kanye West,” one fan joked, referencing the persistent rumor that her now-ex cheated on her with Jeffree.

“I thought this was jeffree star at first but it’s kim LMAOOO,” another Twitter user wrote, while one person shared a GIF of someone acting surprised, along with the caption, “Kim K after she finds out every one is calling her Jeffree Star.” Kim and her sisters are known for rocking wigs more often than not, but Kim has actually committed to the look and dyed her hair blonde in the past.

She went a platinum blonde shade in 2018 as a wedding anniversary gift for Kanye. “I’m back blonde,” Kim said on her Instagram Story at the time. “Kanye’s favorite is blonde, so I did it for our anniversary.” Of course, fans of the famous family would know Kim and Kanye’s relationship has since headed south.

The Keeping Up With the Kardashians star split from her rapper husband after seven years of marriage. Kim was the one to file for divorce in February 2021, requesting joint physical and legal custody of their four kids. Despite their issues, he wanted to make his marriage work with Kim, a source recently told HollywoodLife. “This is not something Kanye wants,” our source said. “If it were up to him this divorce would not be happening so taking this step was very painful for him.