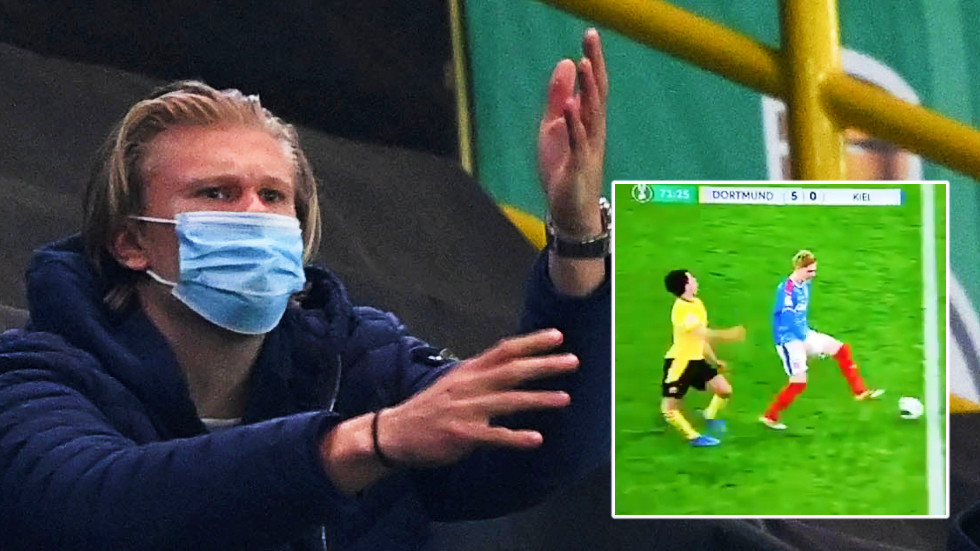 Borussia Dortmund wonderkid Erling Haaland had to look away in the stands as his teammate Mateu Morey suffered a horrific injury against Holsten Kiel in the German cup semifinal on Saturday, finding his knee stuck in the turf.

The third division minnows, who had upset the odds to knock out domestic rulers and Champions League holders Bayern Munich on penalties earlier in the competition, were outclassed at the Signal Iduna Park.

A brace from Gio Reyna and goals by Marco Reus, Thorgan Hazard and Jude Bellingham gave the hosts a 5-0 and a date in the final with RB Leipzig.

Yet it was the horrendous incident involving Morey that stole the headlines.

Ruled out of the match through injury and watching from the stands, golden boy Erling Haaland looked away in horror as his teammate twisted his knee at a shuddering angle while stretching to control the ball.

“We have to wait and see what the investigations reveal.”

Ex-Liverpool star Emre Can vowed: “Of course we are happy about [getting to] the final, but Mateu’s injury seemed bad.

“We will support him no matter how long he is out. It hurts us all.”

Spain youth prospect Morey had been enjoying a breakthrough campaign at Dortmund, featuring in 23 games for them so far.

Brought on in the 62nd minute with the score already 5-0, his cameo lasted just 12 minutes when the grim accident ended his afternoon and season.

Stretchers were immediately called for Morey, who was replaced by Belgium international Thomas Meunier. Dortmund are unsure how long he will be back for.

Offering their support, Dortmund wrote on Twitter: “If there is anyone who will give their all to come back stronger, it’s Mateu. We’re all with you.”

Haaland echoed the sentiment, sharing a photo of Instagram of himself with his close friend, adding: “Come back stronger.”

⚫️ Fur Dortmund nach Berlin 🟡 Gutted to have to miss the final, but I will be your biggest fan in the stands! I unfortunately have to undergo surgery and will be working hard to come back stronger. The road to recovery starts now! HEJA @bvb ⚫️🟡 pic.twitter.com/axmiP8nHrO

Taking to his own Twitter account, Morey posted a photo of himself smiling with thumbs and his feet up on Sunday afternoon.

“Gutted to have to miss the final but I will be your biggest fan in the stands,” he said.

“I unfortunately have to undergo surgery and will be working hard to come back stronger. The road to recovery starts now.”