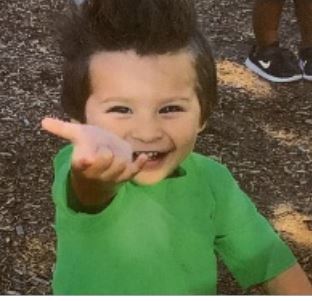 AUSTIN (KXAN) — Austin Police are looking for a 4-year-old boy they believe is in immediate danger. The family is from Austin, and the boy’s father is wanted in a shooting about 70 miles east of Austin. He is considered armed and dangerous.

Police issued an Amber Alert early Monday morning for Wyatt Crowley. They say the boy is 3 feet tall and weighs 30 pounds. He has brown hair and eyes and was last seen wearing a Spiderman sweatshirt.

Police are looking Joshua Crowley, 36, in connection with the case. Crowley is 5 feet, 9 inches tall and weighs 140 pounds. He has brown hair and green eyes. He was last seen wearing a red bandana on his neck and a black baggy T-shirt.

APD tells KXAN that Wyatt and his parents are from Austin. Police are not calling this an abduction or a kidnapping but they want to find Wyatt because he was with his father at the time of an incident that took place in Washington County, Texas.

What happened in Washington County that triggered the Amber Alert

This is a breaking news update. Below is a news release from the Washington County Sheriff’s Office. KXAN will update the story with these details:

According to Sheriff Otto Hanak, on Sunday, 05-02-2021, at approximately 4:00 pm, an apparent random shooting took place at a business located in the 12000 block of F.M. 390 West in the city of Burton. Information indicates that for an unknown reason, a white male fired multiple rounds, from his moving vehicle, at several individuals present at the backside of the business. Numerous rounds struck a 38 year old male as well as striking locations throughout the business building. After the shots were fired, the vehicle departed the scene in an unknown direction. The victim was air lifted to a Bryan hospital with serious injuries. Multiple law enforcement agencies responded and assisted the Washington County Sheriff’s Office, to include the Texas Rangers. Investigators conducted witness interviews, conducted the crime scene search, collected evidence and identified a suspect. Investigators learned that earlier in the day, a Washington County patrol deputy had made contact with this suspect due to a motorist complaint on his vehicle on U.S. 290. Investigator also learned the suspect, along with his 4 year old son, had parked his vehicle, behind the shooting location where it was observed throughout the day. The suspect is identified as 36 year old Round Rock resident Joshua Christopher Crowley. Also with the suspect was his son, identified as 4 year old Wyatt Crowley.

At the time the deputy made contact with the suspect, there was no indication that the child would, later in the day, be the focus of an Amber Alert. The alert was placed the same day of the shooting and as a result of an Austin Police Department’s missing person investigation, which was initiated by the mother of the child. The Austin Police Department was made aware of the Burton shooting that listed the suspect as Crowley after the Washington County Sheriff’s Office sent out a BOLO (Be on the Lookout) for the suspect and vehicle shortly after the shooting.

The suspect and the father of the child have not been seen since departing the scene of the shooting. An arrest warrant has since been issued for Joshua Crowley charging him with Aggravated Assault with a Deadly Weapon. The child is described as being 3 feet tall, weighing approximately 30 pounds with brown hair and brown eyes. He was last seen wearing a Spiderman sweatshirt. The vehicle is described as a 2011 black Mazda containing a paper temporary plate of 737763C. Should anyone observe this vehicle or suspect contact 911 immediately and do not approach. This suspect is obviously armed and dangerous.