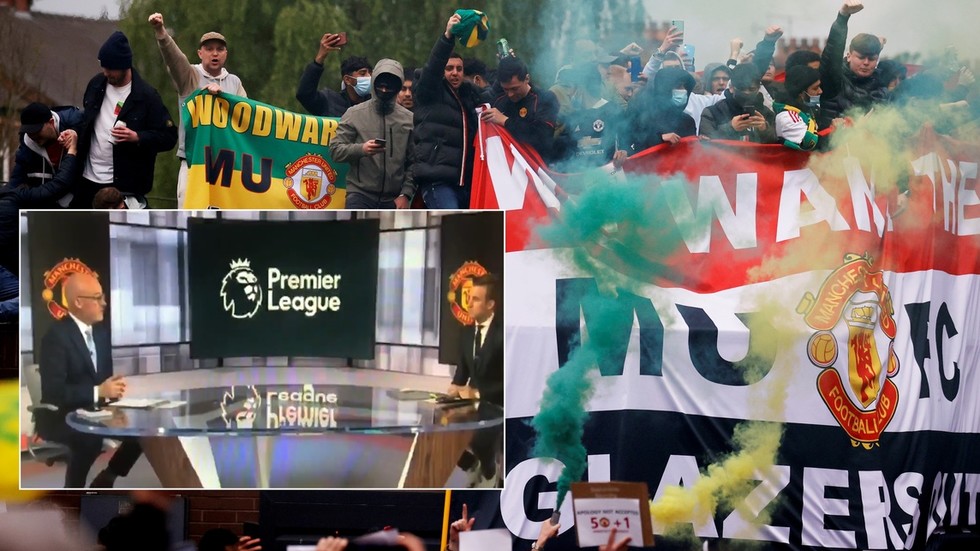 Football commentator Jon Champion was abruptly taken off the air by producers at US network ESPN after launching into a fierce tirade against the influence of American owners in Premier League football.

Sunday’s game between Manchester United and Liverpool was called off amid scenes of fan protests and clashed with police in and around Old Trafford, as irate Red Devils fans demanded that their be voices heard in opposition to the unpopular leadership of the Glazer family, the chief owners of the club for more than 15 years.

The protest was largely seen as a necessary one by the English football community (though reports of fans engaging in clashes with police have been rightfully condemned in all quarters) amid fears that US billionaires are pillaging the soul from football in pursuit of adding a few more zeroes to their sporting portfolios at the expense of the club and its fans.

This opinion was trumpeted by UK football commentator Jon Champion during an appearance on ESPN Sunday, as he savaged the influence of the Glazer family on Manchester United and bemoaned their attempts to transform the famous club from a community-based entity to a soulless “franchise” – although Champion was unable to finish his diatribe after being abruptly cut off.

Jon Champion was speaking up his mind about the Glazer ownership of the club and ESPN cuts him off halfway through. “Land of free speech”. Gotta protect the poor billionaires. Disgrace. #GlazersOutpic.twitter.com/zs88wgyDHK

In response to a comment from former United States international Taylor Twellman in which he said that most major teams in the country are seen as “franchises“, Champion offered a furious rebuke.

“Don’t mention that word, I hate that word,” Champion shot back. “Because that has no place in our lexicon when we talk about European sports clubs.

“They’re clubs with beating hearts, not franchises. You have Manchester United, one of the Super League clubs… owned by the Glazer family who are widely despised as absentee owners.

“They bought the club by loading debt onto it. They don’t show any signs of care for it.

“And yet this is the thing which dominates the lives of so many of its followers, that’s why…”

It was at this point that the plug was pulled on the broadcast, with a few seconds of dead air before an announcer advised that they will return to Champion and Twellman in the studio later on the show.

@JonChampionJC well said Jon before you were silenced. Appreciate not letting the point get lost

Footage of the incident soon went viral and forced ESPN into damage control mode, saying that Champion was silenced due to a technical error and not because of the content of his rant.

Soon after, ESPN released the full clip which shows the conclusion of the discussion.

“So my question – little bit tongue-in-cheek, little bit serious – is when they buy Erling Haaland for £160 million this transfer window, are these fans on the field taking pictures, are they going to be that upset?

“Yes,” Champion said. “They genuinely are, because this is above winning titles, signing players.

“This is the existence of their heartbeat, their club and that is what some of us in America don’t always understand.”

Also on rt.com ‘We do NOT own Man U’: NFL guru Jay Glazer in case of mistaken identity as he receives torrent of abuse after Old Trafford protest

Champion’s polemic was quickly endorsed on social media, with numerous fans thanking him for having the courage to hit out at the occasional incongruity which exists between American sports and its European counterpart.

One fan condemned the incident, sarcastically referring to the United States as the so-called “land of free speech“.

Others described ESPN’s handling of the segment as “disgraceful“, while one more thanked Champion for “not letting the point get lost” before he was “silenced“.