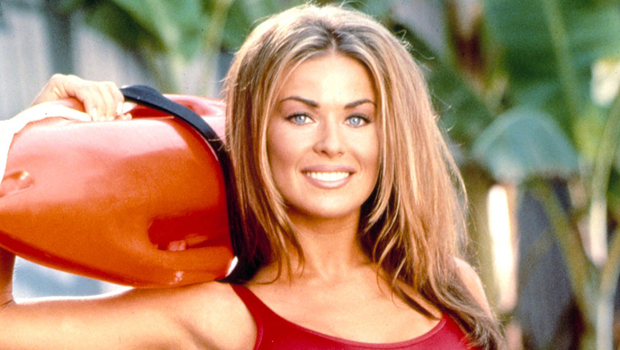 Carmen Electra looked ready to man a lifeguard tower in new swimsuit photos, which had major ‘Baywatch’ energy. Instead of a lifeguard post, though, she was staying in a 60’s/70’s-themed Palm Springs pad.

More than 20 years later, Carmen Electra still looks like she’s on lifeguard duty! The 49-year-old model and actress channeled her character on Baywatch, Lani McKenzie, in a one-piece swimsuit in two Instagram photos shared on May 2 and 3. Instead of the iconic red suit that Carmen donned as a fictional lifeguard on Baywatch, though, this swimsuit was covered in neon colors and leopard print (which we could still imagine beachgoers in the 90’s wearing).

“If I’d observed all the rules I’d never have got anywhere,” Carmen captioned her first swimsuit selfie, quoting a famous line from the late Marilyn Monroe. She borrowed another quote from the fellow famous blonde bombshell to caption her second beachwear photo: “Dogs never bite me just humans.”

Carmen wore her loud swimsuit with a pair of equally colorful, pink sunnies. While the Playboy cover star was dressed to run down a sandy beach shore just like she did on Baywatch in the late 90’s, she actually snapped the photos inside “Leisureland Palm Springs” — a 60’s/70’s-themed Airbnb rental that goes for $ 1,116 a night.

Carmen embarked on a full-on bikini shoot at “Leisureland,” where she had celebrated her 49th birthday with friends and family (her birthday fell on April 20). She also snapped photos in a “tangerine bikini” and a rainbow sherbet-colored holographic one-piece inside the Palm Springs pad.

When she’s not posting bikini content, Carmen’s also sharing throwbacks to her iconic acting roles — like Drew in the 2000 parody movie Scary Movie and Staci in the 2004 flick Starsky & Hutch. Of course, she also reminisces on her time with Baywatch. In addition to the regular TV show, Carmen also starred in the 2003 TV movie Baywatch: Hawaiian Wedding, which she just paid tribute to on April 18.

Carmen shared a “recreation from the cast of #baywatch Hawaii movie” on the cover of For Him Magazine, and gushed that she “love[d]” it. Looking at that photo, you can especially see that Carmen hasn’t aged since her on-screen lifeguard days!