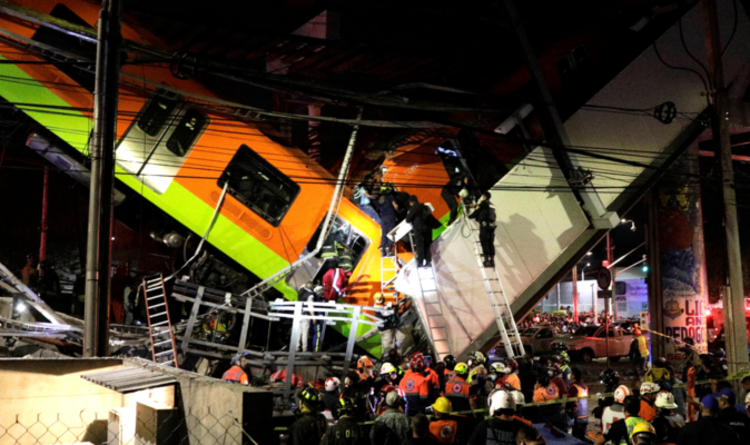 Local sources said the incident happened after 10pm local time (4am BST). Members of the public who were in the area aided police officers and rescue teams in the rescue efforts.
Eyewitnesses at the scene shared footage and photographs of the incident.

Videos posted on Twitter show a crowd of people watching on as rescue teams scramble to help those injured.

Two train carriages can be seen hanging over the rubble of the collapsed structure.

One man participating in the rescue efforts is pictured using an extension ladder to reach the window of one of the train cars.

Mexico City’s mayor, Claudia Sheinbaum, announced on Twitter she was on her way to the scene of the incident.

Moments later, she arrived and described the sight of fire brigades and medical workers.

She added that several hospitals were tending to those injured and that there had been fatalities.

The post stated that at least 13 people had died during the incident, while around 70 others had been injured.

Reports suggest a further two people have been killed.

The tweet added that people were being taken to diverse hospitals, including Magdalena de las Salinas and Belisario Domínguez.