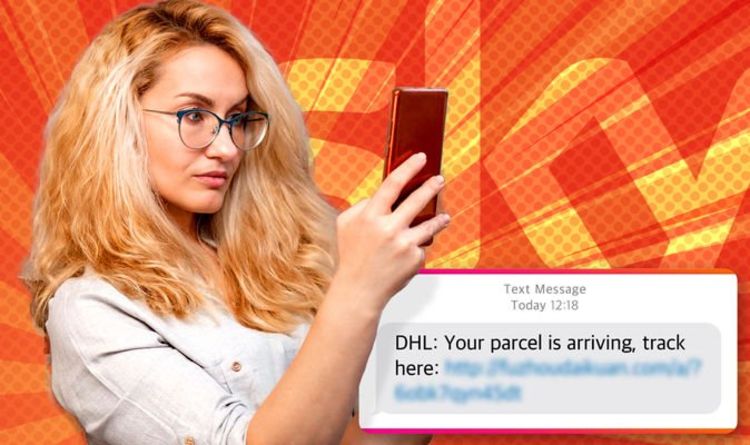 Sky has warned its customers to be on the lookout for a dangerous scam being sent via text message. Anyone who receives the scam message, which claims to be from DHL and provides a quick link to track an upcoming delivery, should block the number, send a report to Sky’s fraud squad, and then delete the text for good.
The warning was shared via the @SkyHelpTeam account on Twitter, which is used to share information with Sky Mobile, Sky Broadband and Sky Q customers who have encountered trouble. It states: “We’re aware of a new scam involving fake text/SMS messages”. The tweet includes a link to detailed blog post about scams targeted at Sky Mobile customers, which adds: “Don’t follow the links in any suspicious text messages; Report suspicious texts by forwarding them to 7726; Block the number and delete the text.”

This scam message promises details on an online order out for delivery with DHL – but when phone owners click on the link to get the delivery information, they’re taken to a spam website that tries to download malware to their device. If you use an iPhone, the malware isn’t able to infect your device, so there’s no risk visiting the website. That’s because Apple doesn’t allow users to install apps from the web – with only the App Store able to install new software. However, if you’re using an Android smartphone or tablet and click on the link – you will kickstart a download of FluBot.

The ability to download apps using files known as APKs is something that leads many people to pick Android over iPhone. It means you’re not restricted to a single App Store and can download software that customises the operating systems in ways that Google or Apple might not allow. However, downloading from outside of the Google Play Store or App Store carries some risks.

FluBot is spyware, which steals passwords and other sensitive data from your smartphone. Given how much personal information we keep on our smartphones, from banking apps to credit card numbers, text messages to friends and teased family photos – you really don’t want any malicious software digging through your files.

Worse still, if your Android device is infected, FluBot will raid your contact details to send out more fake DHL, Hermes or other delivery scams to try to keep spreading the spyware.

If you’re reading this a little too late and already clicked on the link – it’s easy enough to do, especially if you’ve been shopping in the sales online and have lost track of which couriers will be handling your orders – the team at Sky Mobile has some advice about your next steps. In its blog, it warns: “If you’ve already followed a link and given any details and/or agreed to download anything, your phone might be infected with malware.

“The mobile industry recommends you factory reset your device to remove it. After that, avoid restoring from any back-ups you created after the phone was infected to ensure any malware is completely removed. Android users should avoid downloading third-party apps from unknown sources via Settings and ensure the Google Play Protect function is on. If you gave any bank details or used banking apps on your phone, we also recommend informing your bank.”

READ NEXT
Samsung blocks all Android updates from some Galaxy smartphones

This concerning trend is known as smishing – a portmanteau of scam messaging.

The Money Advice Service warns that “smishing can be difficult to spot, particularly if it’s someone who would normally contact you by text. But, like email scams, there are some tell-tale signs. For example, there might be spelling mistakes or the text just addresses you as Sir or Madam. Real messages from these companies will usually address you by your full name.

“You can also look at the phone number it’s been sent from. First, it won’t be the same as the one on your bank card. Second, it might be sent from an overseas number. Fraudsters won’t just pretend to be your bank. Sometimes they’ll claim to be from an online account such as PayPal, or a service you subscribe to, such as Netflix. Fake text message scams have also been reported targeting customers of government organisations such as HMRC and the DVLA.”

The Money Advice Service, which is the largest single funder of debt advice nationwide, warns anyone who is suspicious of these messages to avoid clicking on any links found in the text. If in doubt, go directly to the website and login as normal – navigating to the DHL order tracking webpage of your own volition and inputting the order number from the text will soon rumble it as a fake.