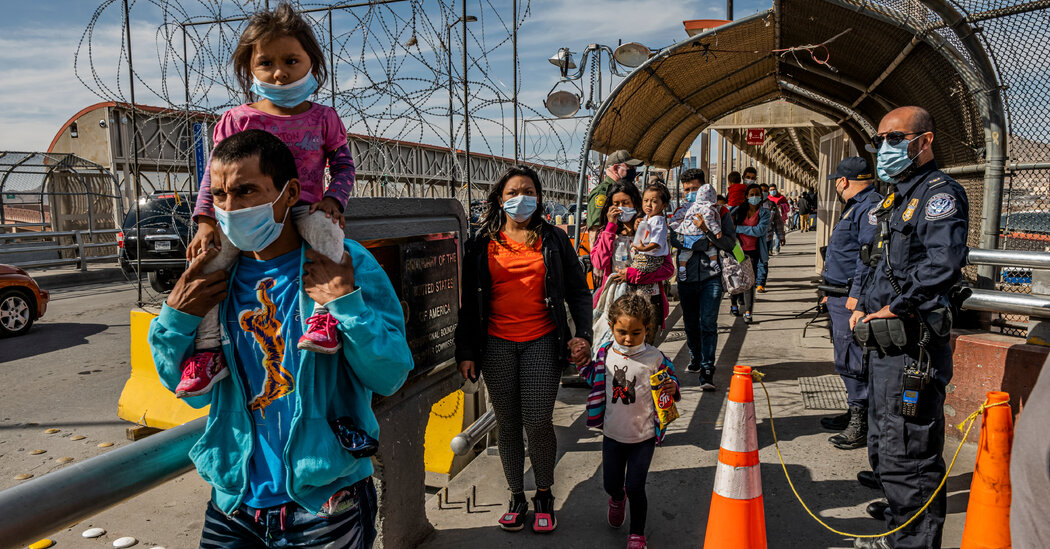 Four parents from Mexico and Central America who were among thousands of migrants deported without their children under the Trump administration’s controversial family separation policy will be allowed to join their children in the United States this week, U.S. officials announced on Monday.

The parents, who are from Honduras, Guatemala and Mexico, will be the first families to reunite in the United States since the Biden administration began taking steps to unravel the 2018 policy that attempted to deter families from trying to enter the country by separating children and parents.

They are among a group of about 35 parents the government has agreed to admit while working on a long-term solution for the remaining separated children, most of whom have been living with relatives in the United States.

An attempt to show quick results, even if they are incremental, reflects the high political stakes for President Biden, who is under pressure to fulfill his campaign promise to make reuniting migrant families a top priority. Reunifying all the remaining families could take months or longer, administration officials say, as parents must be located, often in remote areas, and then paperwork and logistics organized before they can be brought to the United States.

“Today is just the beginning,” Alejandro Mayorkas, the homeland security secretary, said in a statement. “We are reuniting the first group of families, many more will follow, and we recognize the importance of providing these families with the stability and resources they need to heal.”

The four women scheduled to cross the border in Texas and California this week are among parents of some 5,500 children known to have been separated under the zero-tolerance policy officially introduced by former President Donald J. Trump in spring 2018. While most families have been reunited in recent years, more than 1,000 remain apart, mainly because a parent was removed from the United States.

“They are children who were 3 years old at the time of separation,” Mr. Mayorkas said on a call with reporters on Sunday. “They are teenagers who have had to live without their parent during their most formative years.”

U.S. officials said they could not provide details about the families because of privacy considerations, saying only that two of the mothers had been separated from their sons in late 2017, before the Trump administration had extended the policy across the entire southwestern border.

Immigrant advocates and lawyers welcomed the decision to bring a handful of parents to the United States but said that more must be done to address the harm inflicted by the policy.

“We are pleased the Biden administration has now taken its first steps to address the harm caused by the Trump administration’s barbaric family separation practice and thrilled for the four families who will be reunited this week,” said Lee Gelernt, lead counsel in an ongoing class-action lawsuit that the American Civil Liberties Union brought against the policy in 2018.

“But we certainly do not intend to take a victory lap at this point,” he said. “It is not enough for these families to be reunited.”

Mr. Gelernt’s team, which is negotiating with the Biden administration to settle the lawsuit, has demanded financial compensation, mental health services and legal permanent residency for all separated families, among other things.

The family separation policy was a key component of the Trump administration’s crackdown on unauthorized immigration. The goal was to deliver a powerful deterrent to those hoping to come to the United States, a formidable roadblock that affected even families who may have been legally entitled to asylum from persecution in their home countries.

The policy was first made public with a memo in April 2018. Later it surfaced that families had been separated as early as 2017 as part of a pilot program conducted near El Paso. All told, about 5,500 children were separated from their parents.

Under the measure, Border Patrol agents criminally charged parents with illegally entering the United States, imprisoned them and placed their children in government-licensed shelters around the country. Images and audio of children weeping after being forcibly removed from their parents drew widespread condemnation.

In June 2018, a federal judge in California ordered the government to rescind the policy and promptly reunify families, saying that the practice “shocks the conscience” and violates the Constitution.

Most families were reunited within months. However about 1,000 families remained separated because a parent had been deported, and an estimated 645 parents — in the United States or abroad — still had not been contacted by the time Mr. Trump left office.

Mr. Biden deemed the policy “criminal” on the campaign trail, and vowed to swiftly reunite migrant families if he won the election.

Within weeks of taking office, he signed a series of executive orders intended to roll back Mr. Trump’s most stringent anti- immigration policies. A central piece of his early agenda was an interagency task force, led by Mr. Mayorkas, to identify and reunite all migrant families separated at the border by the previous administration.

It has been a mammoth undertaking. Contact information for many parents is outdated or unavailable, and some parents have disappeared or prefer not to be found out of fear. The task force has managed to find about 200 out of the 645 remaining parents, and it recently reported that it is reviewing 5,600 additional files from early 2017 that could contain evidence of more separations.

“One of the things is, we don’t know yet where those kids are,” Mr. Biden said last week in an interview with NBC News. “We’re trying like hell to figure out what happened.”

“It’s almost like being a sleuth, and we’re still continuing to try like hell to find out where they are,” he said.

Last year, nine deported parents were allowed to enter the United States to rejoin their children after the federal judge in the class-action lawsuit, Dana Sabraw of the Federal District Court in San Diego, ordered their return. About a dozen others managed to return with the help of private lawyers.

But these efforts faced strong resistance from the Trump administration.

“Even with a court order, bringing back parents was vigorously resisted at every stage,” said Linda Dakin-Grimm, a Los Angeles lawyer who represented a Guatemalan father who returned last year. The man had been separated from his 12-year-old daughter.

She said the Biden administration’s decision to allow deported parents into the country signaled “the beginning of a new way that’s important, but there remains a huge lift to be accomplished.” Crucial to the effort are reassurances that parents who return to the United States will not be detained or deported, allaying fears that have inhibited some parents from coming forward.

“It’s huge that they are hearing at the front end that they can remain here for a period of time without fearing deportation,” said Conchita Cruz, co-executive director of the Asylum Seeker Advocacy Project, which represented a mother who was reunited with her son in February 2020 under the court order.

The admission of the initial four parents, who were expected to begin arriving from Mexico on Tuesday, provides an opportunity to test the reunification process and fix glitches ahead of larger numbers of entries.

Among those coming this week is a Honduran woman who was separated from her two children in the fall of 2017. The mother spent nearly two years in immigration detention in El Paso before being expelled from the country without her children.

She has communicated with them over WhatsApp video and voice calls since then.

“She has been trying to be the mother she wants to be,” her lawyer, Linda Corchado, said. “All the trauma in between has made it impossible.”

She will be allowed to remain in the country for three years on humanitarian parole, with hopes of eventually winning permanent residence.

Mr. Mayorkas did not reveal when additional parents would be allowed into the United States to join their children but said that the arrivals this week would be the first of many.

“We are accomplishing reunifications without delay,” he said.

Michelle Brané, a veteran immigrant rights advocate serving as executive director of the Biden administration task force, said her team had been combing through records, often incomplete, to piece together and review cases.

In addition to demands for legal residency and monetary compensation, some advocacy groups are calling on the Biden administration to consider filing civil lawsuits or even criminal charges against officials in the Trump White House who were behind either the design or enforcement of the family separation policy.

When asked about this on Sunday, Mr. Mayorkas said that the Justice Department was part of the reunification task force, but he did not commit to pursue investigations. “We have not excluded accountability,” he said, “but our focus right now is on the reunification of the families.”

allowed, children, from, into, migrants, separated, their, U.S.