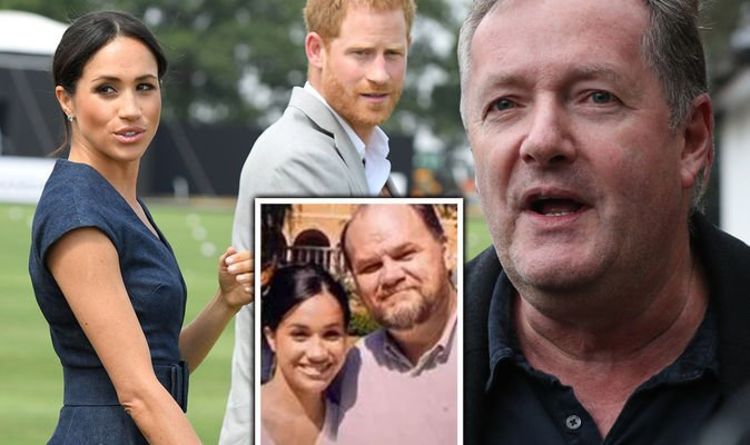 Piers Morgan, 56, has unleashed a furious tirade about Meghan Markle’s new book, entitled The Bench, which is based on the special bond between fathers and sons. The star, who quit Good Morning Britain in March after sparking backlash from viewers due to his scathing comments about the Duchess of Sussex’s interview with Oprah Winfrey, claimed the project “would make the current shortlist for the title of World’s Most Ludicrously Inappropriate Book”.
Responding to Meghan’s announcement that her debut children’s book will follow “the warmth, joy and comfort of the relationship between fathers and sons from all walks of life”, Piers fumed in his latest column for MailOnline: “Sorry, WHAT?

“Notwithstanding Ms Markle’s seemingly unlimited thirst for committing attention-seeking acts of gargantuan hypocrisy, this seemed beyond parody. But it was real.”

Piers then admitted he had “laughed out loud” while reading the description of the book.

He added: “I wonder how much these touching sentiments will resonate with her own family, or her husband’s?

“Lest we forget, Ms Markle has ruthlessly disowned her father Thomas and refuses to have anything to do with him despite the fact they now live just 70 miles from each other.”

Piers went on to slam Meghan’s husband Prince Harry, as he “trashed his father Prince Charles” for cutting him off financially while speaking alongside his wife to Oprah.

The outspoken journalist continued: “I don’t wish to rain on the comically sycophantic parade – but I suspect this book will become an instant historical classic for all the wrong reasons.

“The whole notion of Meghan Markle dishing out advice to anyone about the relationship between fathers and children is absolutely ridiculous given the appalling relationships she and her husband have with their own fathers.

“And if she really cared about father-child relationships, she would never have trashed Harry’s family on global TV in the horrible way that she did, causing yet more damage, possibly irreparably, to Harry’s relationship with his father.”

Piers has never held back when unleashing his opinions on Meghan’s actions since she and Harry made the decision to leave their lives as senior members of the Royal Family behind for a life in America.

The star was criticised for disbelieving the Duchess of Sussex when she opened up about experiencing suicidal thoughts after joining the Royal Family.

Media regulator Ofcom then confirmed it would be launching an investigation after over 40,000 complaints were made.

The huge figure has since grown to over 57,000, meaning it has become the most complained about television moment in Ofcom history.

Just before he announced his departure, Piers stormed off the GMB set live on the show after an argument about his dismissal of Meghan’s comments with his co-star Alex Beresford.

During her explosive interview, Meghan spoke candidly to Oprah on her time as a member of the Royal Family while living in the UK with Harry and their son Archie Harrison Mountbatten-Windsor.

The Duchess of Sussex described the Queen as being “really welcoming” in one part, however, she also discussed how she felt upset after Archie was not made a prince.

She went on to claim that there were multiple conversations and concerns about “how dark” her son’s skin colour would be before he was born.

The host asked who made such a statement. However, Meghan would not reveal who it was, saying it would be “very damaging” to their reputation.