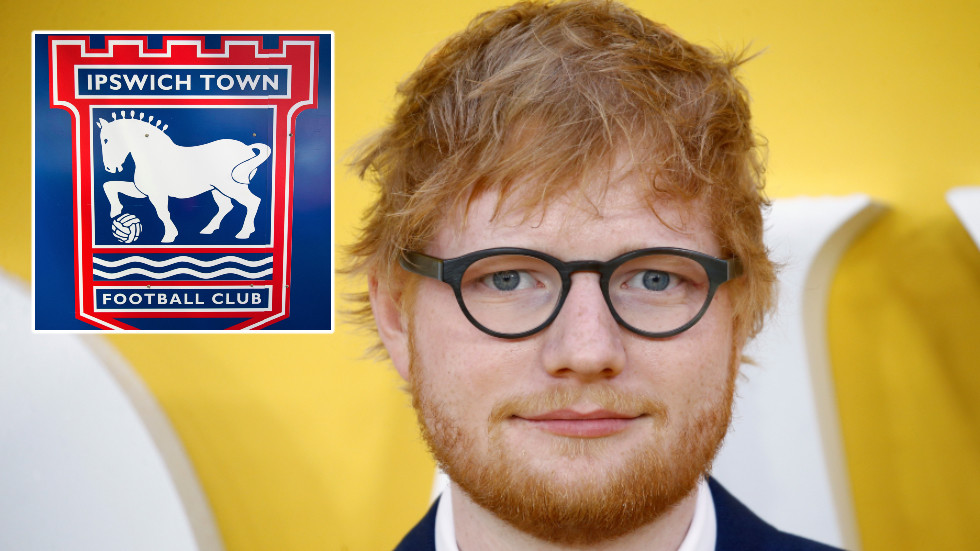 Former English champions Ipswich have revealed that their best-known fan – divisive pop star Ed Sheeran – will be their shirt sponsor next season, inviting a barrage of mockery and support from fans and music lovers.

Balladeer Sheeran has long trumpeted his support of his local side in Suffolk, who were once giants of the English game but are now in the second tier and facing their 20th year outside of the Premier League in a marked decline from the halcyon days when they competed in Europe, even winning the UEFA Cup in 1981.

Now the cringeworthy crooner has backed up his appearances at their famous Portman Road home with financial backing, becoming the club’s shirt sponsor from next season, when an advert for his next tour will be emblazoned on Ipswich’s kit.

“We are obviously thrilled that Ed has agreed to become our shirt sponsor next season,” said Rosie Richardson, the director of sales at the Championship also-rans.

Just when you thought you couldn’t embarrass yourselves any further 😂

“I have worked with Ed and his management team on various initiatives over the years and welcomed Ed and his guests to Portman Road for many games.

“He has shown his support for his hometown in lots of ways and this is another example of that.”

Schmaltzy Sheeran’s songs are not top of the pops for everyone, and the news was music to the ears of supporters of clubs including Ipswich’s fierce local rivals, Norwich.

When you consider all the plus and minuses to this, it really does equal to a divided fan base in weeks to come. The problem will only multiply

“Just when you thought you couldn’t embarrass yourselves any further,” goaded one Canaries fan, while others seized upon Sheeran’s use of basic mathematical symbols to name his albums.

“When you consider all the pluses and minuses to this, it really does equal a divided fan base in weeks to come,” predicted one. “The problem will only multiply.”

A fan of Ipswich’s sometime-rivals Portsmouth chimed in: “The minus part will come in useful for your goal difference next season.”

The chart-conquering 30-year-old offered a photo of himself as a youngster in a bygone Ipswich shirt on Instagram, smugly telling his following of almost 32 million: “This bloke is the new sponsor of Ipswich Town Football Club. Do well.”

His manager, Stuart Camp, responded by saying that the post “will never be bettered”, and Sheeran added to the club’s website: “[Ipswich] is a big part of the local community and this is my way of showing my support.

“I have always enjoyed my trips to Portman Road and I’m looking forward to going back there as soon as supporters are allowed into stadiums again.

Ed pumping ££££ into #itfc is brilliant 👏Top bloke when I met him at a Trophy game.

“With the new owners from the US coming in, there are sure to be exciting times ahead for Ipswich fans, including myself.

“Hopefully we can stop being sloightly on the huh [underwhelming].”

Sheeran’s last tour, called Divide, grossed $ 775 million between March 2017 and August 2019. Various financial sites have estimated his net worth at around $ 200 million.

Also on rt.com ‘You are the best’: Thiago Silva’s wife reappraises Werner after goal as she goes wild during Chelsea Champions League win (VIDEO)