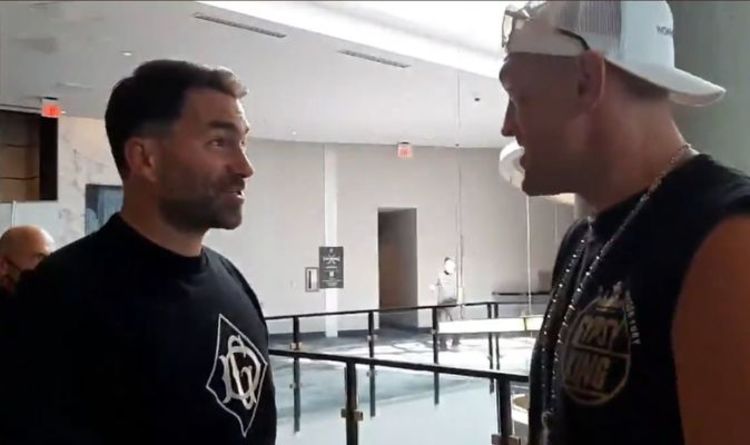 Tyson Fury has congratulated Eddie Hearn for completing the deal for his undisputed heavyweight clash with Anthony Joshua this summer upon arrival in Dallas for Canelo Alvarez and Billy Joe Saunders’ super-middleweight unification. The Gypsy King touched down in Texas to support his close friend and fellow gypsy this Saturday and rocked up to the fight week hotel yesterday with trainer SugarHill Steward.
Upon arrival, he was greeted by Hearn, who has been the subject of several digs from Fury in the past few weeks.

“The champ is here!” Fury said, as he climbed the stairs into the foyer and put on his sunglasses during a video captured by ESPN’s Salvador Rodriguez.

“You got it done then mush,” Fury said before Hearn replied: “Told ya! It was easy actually, easy.”

“Show some authority then!” Fury responded cheekily, as the pair embraced with a handshake.

Hearn then shook hands with trainer Steward who asked Hearn how he was, before the two parties awkwardly dispersed.

The Matchroom chief was then asked by a reporter whether a big announcement was imminent.

It’s understood that Hearn is planning to announce that the biggest fight in boxing is on for August 7 in Riyadh, Saudi Arabia after Saturday’s main event.

Last week, Fury’s promoter Bob Arum claimed that the fight was “dead in the water”, while Hearn stated that was not the case.

The contractual agreement has taken much longer than expected due to the number of lawyers involved.

Hearn has confirmed that legal teams from England, the Middle East and the west coast of America have all been working on the final document that needs to be approved by all parties.

Meanwhile, Fury is adamant that Saunders will come out on top against Canelo in what would be one of the most famous upsets by a Brit on away soil.

He told Matchroom Boxing in the hotel lobby: “I’m 100 percent confident he [Saunders] will smash this mother f*****.

“100 percent. I think he’s going to give him a boxing lesson then smash him around about round 11 or 12.

“Really confident honestly, never been this confident about anything in my life.

“Don’t make Canelo out to be some killer, he’s just a little man with a pair of boxing gloves on. That’s all he is.”