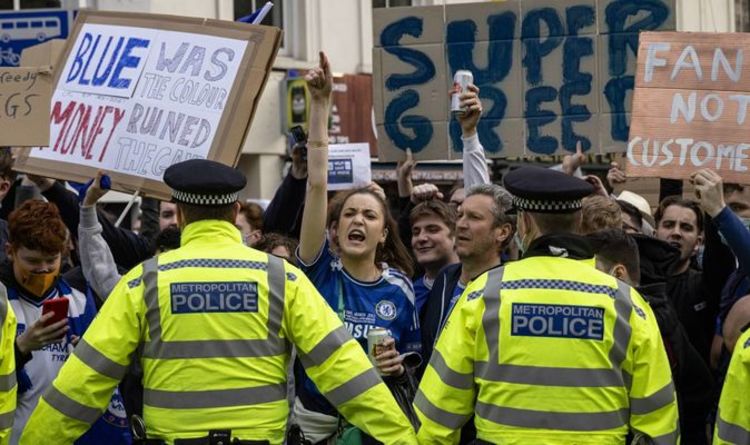 The Premier League is set to hit the division’s ‘Big Six’ clubs with ‘substantial’ fines following their attempts to form a breakaway league. The European Super League collapsed after just two days last month after initially signing up 12 of the continent’s biggest clubs.
Manchester United, Manchester City, Liverpool, Chelsea, Arsenal and Tottenham all signed up to be founding members before backtracking 48 hours later after a backlash.

Supporters of all six clubs responded angrily to the proposals, which would have seen the clubs leave the Champions League to play in a closed shop alongside other founding members Real Madrid, Barcelona, Atletico Madrid, Juventus, AC Milan and Inter Milan.

Uefa responded by threatening the clubs with lifetime bans from its competitions, while Fifa said any players involved would be unable to compete in the World Cup.

The Premier League’s 14 other clubs held a meeting last month to discuss how best to punish the ‘Big Six’ after they performed U-turns.

The Telegraph now reports that they have decided to hand out fines to the clubs, after no momentum was found to hit the teams with points deductions in the Premier League.

In a statement on Monday, the Premier League said it would strengthen its rules to guard against a repeat of the Super League.

It read: “The events of the last two weeks have challenged the foundations and resolve of English football.

“The Premier League has prepared a series of measures to enshrine the core principles of the professional game: an open pyramid, progression through sporting merit and the highest standards of sporting integrity.

“These measures are designed to stop the threat of breakaway leagues in the future.

“Opposition to the proposed Super League united the whole of football, with the fans’ voice clearly heard. The Premier League recognises the strength of feeling and the right of fans to know what is happening.

“We are committed to maintaining close dialogue with supporters and their representatives, as we work with The FA and Government to identify solutions, but ask that all protests are peaceful.

“The actions of a minority of those present at Old Trafford on Sunday have no justification and will be investigated by the Premier League and The FA as well as by the Greater Manchester Police.

“The actions of a few clubs cannot be allowed to create such division and disruption. We are determined to establish the truth of what happened and hold those clubs accountable for their decisions and actions.

“ We and The FA are pursuing these objectives quickly and appropriately, consulting with fans and Government.”