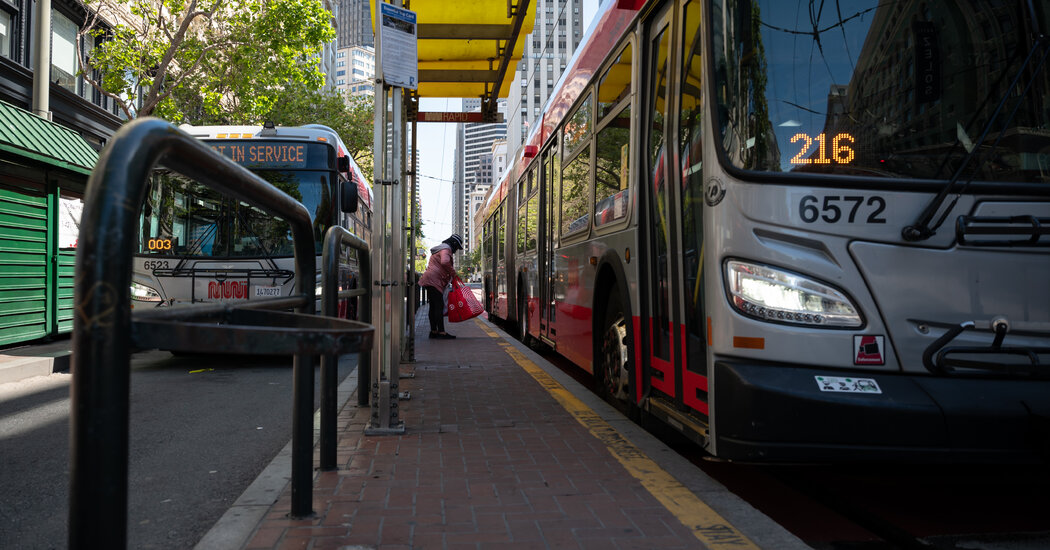 SAN FRANCISCO — From her flower stand on Market Street, Patricia Lee saw the glint of a large blade and then feathers from a winter jacket fly through the air. An older woman buckled to her knees.

In broad daylight, on one of the busiest streets in San Francisco, two unsuspecting Asian women, one of them 84 years old, had just been attacked by a man with a large military-style knife, the authorities and witnesses said.

“He walked right next to me — I could have been the one who got stabbed,” said Ms. Lee, who witnessed the attack on Tuesday afternoon. Police arrested a 54-year-old man, Patrick Thompson, who they say carried out the attack, although the motive remains unknown.

Mr. Thompson was charged on Wednesday with attempted murder. Both women were treated for their wounds at a San Francisco hospital and their conditions were described by the police as non-life-threatening.

Over the past several months, Asian-Americans in the San Francisco Bay Area have been shoved to the ground, punched and robbed — attacks that have come amid a rise in anti-Asian hate across the country and the scapegoating of Asian communities for the spread of the coronavirus.

The stabbing on Tuesday in San Francisco has only added to the anxiety of a large segment of the city’s population. Community organizations and the San Francisco police recently introduced a Mandarin and Cantonese hotline to report crimes and attacks.

“The community is reeling from the onslaught of brutality against defenseless and fragile people,” said David Lee, an activist in the city’s Chinese community who is in the same family association as the 84-year-old victim. “It speaks to the violence, the lawlessness, the lack of civic responsibility and order on the streets of San Francisco right now.”

After a year of aggressive and effective measures against the coronavirus, San Francisco has been opening back up. There were about 15 people waiting on Tuesday at the bus stop where the two women were stabbed, one sign that the city is coming back to life. Yet many say the pandemic has contributed to two other crises: a drug overdose epidemic that killed twice as many people in the city as the coronavirus did last year, and the string of violence against Asians.

Asian-American grandparents who spent months stuck inside during lockdowns are now afraid to go outdoors, said Carl Chan, the president of the Oakland Chinatown Chamber of Commerce.

Mr. Chan has been one of the most prominent voices in the Bay Area Chinese community raising concerns about the attacks. In a measure of how common they have become, Mr. Chan himself was assaulted on a street in Oakland last week. On his way to visit a 69-year-old Chinese man who was recuperating after being attacked with a cane on a public bus, Mr. Chan was punched in the head by a man who called him a racial slur.

“I’m extremely concerned,” Mr. Chan said on Wednesday of the continued violence against Asians. “We have to stand up no matter how many attacks and stop this craziness.”

In many cases, the police and prosecutors have struggled to establish a motive. A spokeswoman for the San Francisco District Attorney’s Office, Rachel Marshall, said five people in the city have been charged with anti-Asian hate crimes this year. Others have been charged with elder abuse, including a 19-year-old man who was accused of fatally assaulting Vicha Ratanapakdee, a retired bank auditor from Thailand, on a chilly January morning.

Many of the assaults have occurred in and around the Tenderloin, a district that struggles with some of the city’s most intractable social problems, including people suffering from mental illness and drug addiction who often live on the streets.

Two attacks in March carried out by a man the police identified as Steven Jenkins, 39, illustrate the hazy ambiguity that the street conditions can bring to some of these attacks.

The authorities said Mr. Jenkins attacked a 75-year-old Chinese grandmother and an 83-year-old Vietnamese man, assaults that gained national attention because the grandmother, Xiao Zhen Xie, fought Mr. Jenkins with a small plank. Mr. Jenkins was arrested and charged with assault, battery and elder abuse. He has pleaded not guilty.

Lawyers for Mr. Jenkins said he had been homeless for a decade and suffered from mental illness. The public defender’s office released security camera footage showing a chaotic set of circumstances leading up to the point where he attacked Ms. Xie. In the video, Mr. Jenkins is punched by several people before he turns to strike Ms. Xie.

A torrent of hate and violence against people of Asian descent around the United States began last spring, in the early days of the coronavirus pandemic.

“There’s a lot of desperate people out there now,” said Danny Yu Chang, a travel agent from the Philippines, who was knocked unconscious by an attacker in March as he returned to his downtown San Francisco office after lunch.

A relative of Mr. Vicha, the retired bank auditor who was killed in January, said he saw a progression during the pandemic that began with Asians being spit upon and blamed for the virus but later escalated to physical attacks.

Mr. Lee, the community activist, said the constant barrage of videos and reports showing attacks on Asians has been particularly wearing.

“Every time we see a story that is the worst we’ve seen, another one comes along,” he said. “There is this escalation of horrors that never seems to end.”