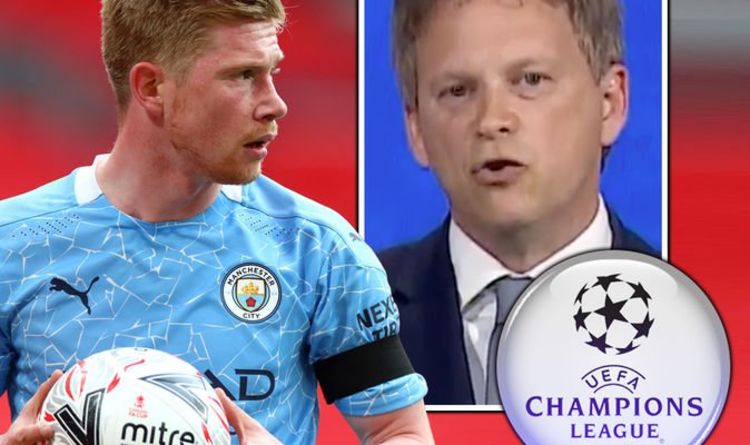 Transport Secretary Grant Shapps made the announcement this evening as he confirmed Turkey was being added to the ‘red list’ of countries, meaning fans would be unable to attend the match which is due to take place in Istanbul.
Ministers today unveiled their plans to re-open international air travel after May 17, with 12 countries given the go-ahead for Brits to travel without the need to quarantine on return.

However, at the same time, it was announced Turkey was being placed on the ‘red list’ meaning those returning must pay to quarantine at a specialised isolation hotel when travelling back to the UK.

Mr Shapps admitted placing Turkey on the do not travel list was a blow for football fans looking to support their teams in the all English final of the European Champions League.

Announcing conversations about moving the final were taking place, he said: “With regard to the Champions League it does mean I’m afraid fans should not travel to Turkey.

UEFA has so far rejected calls for the fixture to be moved.

A spokesperson for the organisation said yesterday: “The UEFA Champions League final will take place in Istanbul on 29 May with a limited number of spectators and we are assured the temporary lockdown which is in force until 17 May should not have any impact on the match.

“UEFA continues to work closely with the Turkish Football Federation and the local and national authorities to stage the match safely.

“Detailed information regarding the capacity for the match, travel and ticketing details will be communicated publicly by the end of the week.”

In an updated statement released this evening following Turkey being placed on the red list, a UEFA spokesperson said “we need a bit of time to reflect on the topic”.

Turkey was originally due to hold the Champions League final last year between Bayern Munich and Paris Saint-Germain but the fixture was moved to Lisbon because of the coronavirus crisis.

Earlier this week Aston Villa approached the FA and UEFA to offer Villa Park for the final.

It is thought unlikely the match could be played at Wembley which is already in use for the play-off finals for League One, League Two and the Championship.