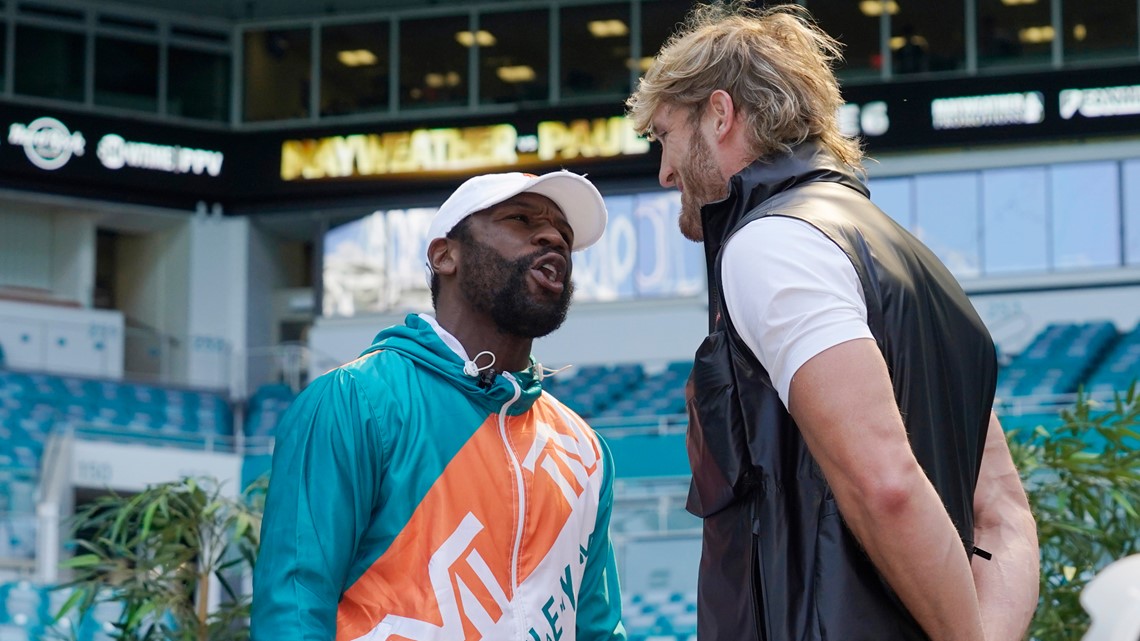 Mayweather had a 50-0 record with 27 knockouts during a career in which he won world titles in five weight divisions over three decades.

MIAMI GARDENS, Fla — A month before he returns to the ring at age 44 for an exhibition bout, Floyd Mayweather wound up in a brawl.
The boxing Hall of Famer will face Logan Paul in a pay-per-view event on June 6 at Hard Rock Stadium in Florida. On Thursday, he squared off — sort of — with Paul’s brother, Jake, who prompted the scuffle when he took Mayweather’s cap.
Apparently incensed that Mayweather called both Pauls “fake fighters” and offered to take on both on the same night, Jake Paul confronted the former champion. In what appeared to be a staged get-together, Paul grabbed Mayweather’s white baseball cap and “security” jumped between the two as Mayweather surged toward Paul.
“I don’t have to talk about what I’m going to do. The world knows what I’m going to do,” Mayweather said. “I’m willing to fight both in the same night.”
Mayweather had a 50-0 record with 27 knockouts during a career in which he won world titles in five weight divisions over three decades. Among the opponents he beat were Canelo Alvarez, Manny Pacquiao and Oscar De La Hoya before he retired in 2015 — though he stopped mixed martial arts fighter Conor McGregor in 2017.
RELATED: Westlake native Logan Paul announces boxing exhibition vs. Floyd Mayweather Jr.
RELATED: Boxer Floyd Mayweather to pay for George Floyd’s funeral, memorial services
In the 26-year-old Paul, Mayweather will face a star created on the internet. Followed by more than 20 million on YouTube, Paul began boxing in 2019 with a six-round bout against fellow YouTube star KSI. A former high school wrestler, Paul will have a 6-inch height advantage over Mayweather, but obviously gives away plenty in ring experience and mastery.
“Logan Paul is huge on YouTube and he has a huge following. He’s a big guy, strong guy,” Mayweather said. It’s just fun. It’s entertaining. It’s all about entertainment and, of course, when he’s on social media, he’s entertaining to people all the time.”
It’s uncertain if Mayweather was referring to the news conference altercation as entertaining, too.
“I just feel inspired,” Logan Paul said. “I want to beat the (stuffing) out of him. I really do. This fight means so much to me. To my fans. To my family. To everyone watching who thought they couldn’t do something in life. That’s the energy I’m going in with. Everyone says this is impossible. Well it was impossible that I got this fight.”
The undercard will feature heavyweights Jean Pascal against Badou Jack, and super welterweight Jarrett Hurd vs. Luis Arias. Former NFL wide receiver Chad Johnson will make his boxing debut.
The pay-per-view telecast will be on Showtime.