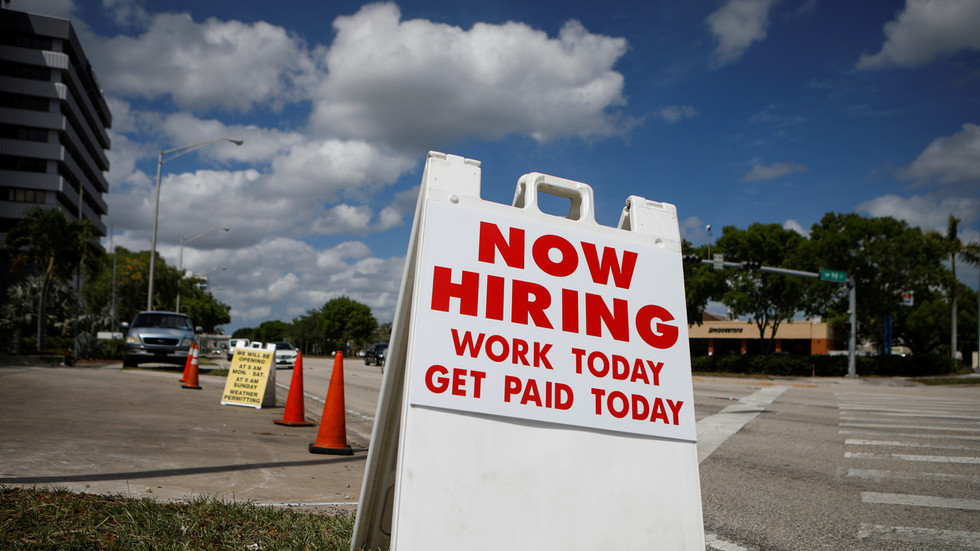 Despite bullish predictions and the recovery of the US economy, job growth slowed in April compared to a month earlier, figures released by the Labor Department show.

According to the agency’s report released on Friday, payrolls increased by 266,000 last month, while the unemployment rate edged up to 6.1%. This is well behind analysts’ projections, with economists polled by Reuters forecasting that 978,000 jobs would be added, while a Bloomberg survey projected a hiring surge of 1 million in April.
Also on rt.com America’s richest boosted their fortunes by $ 195 billion in Biden’s first 100 days – media
Moreover, March figures for US job growth faced a downward revision. New figures show that US employers hired 770,000 people, instead of the originally estimated total of 916,000.

The Labor Department said that the notable job gains in the leisure and hospitality sector seen in April were partially offset by employment declines in temporary help services and in couriers, as well as decreases in manufacturing and retail employment. However, even with the recent gains, that exceeded those of other industries; employment in leisure and hospitality is down by 2.8 million, or nearly 17%, since February 2020.
Also on rt.com Biden’s corporate tax rate hike could kill millions of jobs, business group’s study finds
The bad news reflected in the closely-watched jobs report did not affect the US stock market. The Dow Jones Industrial Average was up 0.4%, the S&P 500 rose 0.7%, and the Nasdaq Composite added over 1% in early Friday trading.