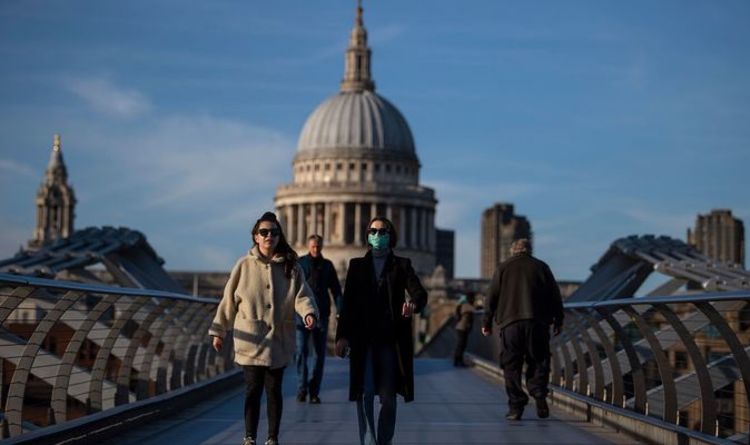 Coronavirus cases in the UK remain below 3,000 a day as the UK continues to implement its successful vaccine rollout. Speaking to The Telegraph on Friday, Clive Dix, former head of the UK’s vaccine taskforce, said the country would be safe from the virus in the coming months.
“Sometime in August, we will have no circulating virus in the UK,” predicted Mr Dix.

The suggestion comes as British officials say people under 40 will be offered an alternative to the AstraZeneca vaccine amid health concerns over blood clots caused by the jab in rare circumstances.

Mr Dix added that, within three months, “we will have probably protected the population” from the virus.

He added: “All the variants that are known; I think we’ll be safe against over the coming winter.”

The latest Government figures suggest that over 35 million people have received their first dose of the vaccine and around 16.7 million people are fully vaccinated.

Mr Dix was appointed the interim leader of the vaccine taskforce back in December and stepped down from the role last week.

He was also an integral team member that struck deals with vaccine producers near the start of the pandemic – when there was no certainty that any vaccines would be successfully created.

He further predicted that everybody in the UK will have had their first dose of the vaccine by the end of July.

Experts and the public hope that if cases remain low as the country slowly eases on lockdown restrictions that a holiday abroad this summer might be allowed.

Yesterday, the UK unveiled a list of 12 countries and territories that are on its green list for quarantine travel from May 17.

Looking to the future, Mr Dix also predicted that the UK’s vaccination rollout has been so successful that a booster shot programme might be pushed back to early 2022.

He said: “We may decide that we need to boost the immune response, and we’ve got the vaccine to do that.

Whether we’ll need to or not, I would think probably not, but we might still do it in case.

“I really don’t think it should be autumn. We should be thinking about boosting in maybe January or February, because the immune response will be strong.”