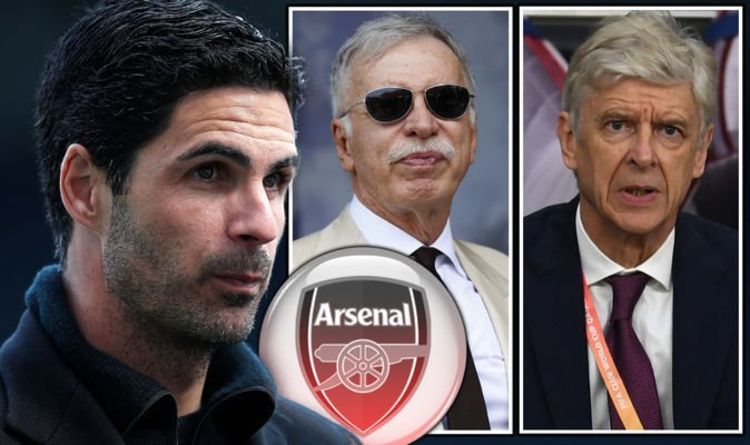 Mikel Arteta insists he remains the right man to revive Arsenal but insists the club’s hierarchy must get “ruthless” over the summer months in order to overcome yet another below-par campaign, one which he thinks continues a five-year decline.
The Gunners boss insists the club’s decline started well before him and even before Arsene Wenger left, with Unai Emery – the man who dumped Arsenal out of the Europa League at the semi-final stage on Thursday night – failing to arrest the slide after the Frenchman left in 2018.

Arsenal owner Stan Kroenke is expected to stick with Arteta into next season although the north Londoners’ season, which was pinned on the Europa League, fell apart this week.

A 0-0 draw against Villarreal, after a 2-1 first-leg defeat, means Arsenal’s chances of silverware are over and that they will go another year without Champions League football having been stuck outside of UEFA’s premier competition since 2016-17.

Arteta’s charges are sat ninth in the Premier League table at present and could feasibly finish in the bottom half for the first time since the 1994-95 season.

The season after that was the last time Arsenal had no European football and it is highly likely that their 25-year run of Champions League or Europa League football will end. It does not even appear that there will be Europa Conference League nights at the Emirates next term.

Yet though Arsenal are moving further backwards, having won the FA Cup last season and the Community Shield at the start of the current campaign which has soured badly, Arteta is confident he can be the one to turn the tide.

But the former midfielder insists it will be no easy task because he claims Arsenal have been battling mediocrity for the past five years, despite winning two FA Cups in that time.

And Arteta wants Arsenal to get ruthless as he made it clear to the Kroenkes that they must address the problems in their first-team squad over the summer.

The Spaniard said: “We have not been competing with the top clubs in this country for five years. It is not as if this process started six months ago – it started five years ago and you can see this trend.

“I understand those concerns because when you are out of the Champions League for five years it is not just a casualty, it’s a trend.

“This year is not year one. I think a project has its phases and I am telling you we are in a much better position today to be where we want to be very soon, if we do what we have to do.

“But we have to be ruthless. There is no time to waste and there is a lot to do.

“What I felt was a deep pain because where this club is at the moment, with everything it has been through over the last months, I had a feeling that if we could take the team to the final, it could be a great turning point.

“I know that we have disappointed a lot of people as well, and that really hurts because we want to give the best to everybody, but one thing I made clear is that to do what we want to do, I have no doubts that we are going to achieve it. If not, I wouldn’t be sat here.”

Arteta is desperate to repay the club’s fanbase, who have largely stuck by the former captain’s side, at least prior to the semi-final loss to Villarreal, which prevented an all-English final showdown against Manchester United.

“I know their disappointment. We are here to give them joy, to give them moments where they can feel proud of what we do.

“We were able to do that last season and we haven’t this season. We are the ones who have to give them something to cheer about. I think it is our moment to do something for them.”

Arsenal will look to pick themselves up and at least end the season respectably following their European disappointment.

They take on West Brom this Sunday (7pm kick-off) knowing they could relegate the Baggies with a win, then face Champions League finalists and London rivals Chelsea at Stamford Bridge the following Wednesday.

Arteta’s first full season in charge then sees Arsenal face Crystal Palace in their penultimate match before hosting Brighton to see out the campaign.