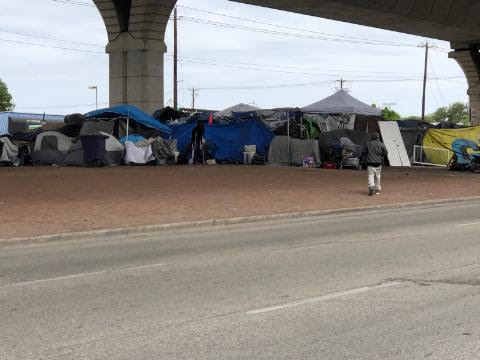 AUSTIN (KXAN) — The exact how and when for implementing Austin’s public camping ban were still murky late Friday, with the city saying more details would be coming out early next week.

Here’s what we do know: City Manager Spencer Cronk told council Thursday the new law passed by voters will be phased in gradually and done in a safe and humane manner.

“City staff is currently working to develop a phased implementation of the camping ordinance beginning on its effective date of May 11th, with an emphasis on health, safety, and connection to services wherever possible,” a city spokesperson told us in a follow-up email Friday.

Meanwhile, Integral Care, which is considered Austin and Travis County’s mental health authority, said it would continue to make contact with people experiencing homelessness, camping ban aside. The organization’s mental health professionals make up teams that also include law enforcement officers and emergency medics, assessing the needs of those experiencing homelessness and connecting them with housing and other services.

“What we want to do is educate individuals who are living unsheltered to understand what is changing, when will they need to move, help them secure their most important belongings such as documents or other things,” said Ellen Richards, chief strategy officer of Integral Care.

Richards said the city has not yet provided Integral Care with a timeline for when the camping ban implementation will be complete.

“Our hope would be that we work in a similarly collaborative nature with the city on the rollout of this initiative, and we’re certainly ready to do that,” she said.

Richards said based on previous reports, 30 to 50% of Austin’s homeless population needs mental health treatment. We asked the city whether mental health officers from Integral Care would go with police officers to encampments while the ban is being implemented.

“Implementation of the ordinance will require a coordinated effort among multiple departments including the Austin Police Department, the Homeless Strategy Division, the Homeless Outreach Street Team, the Downtown Austin Community Court, Parks and Recreation Department, and others,” the city spokesperson only said.