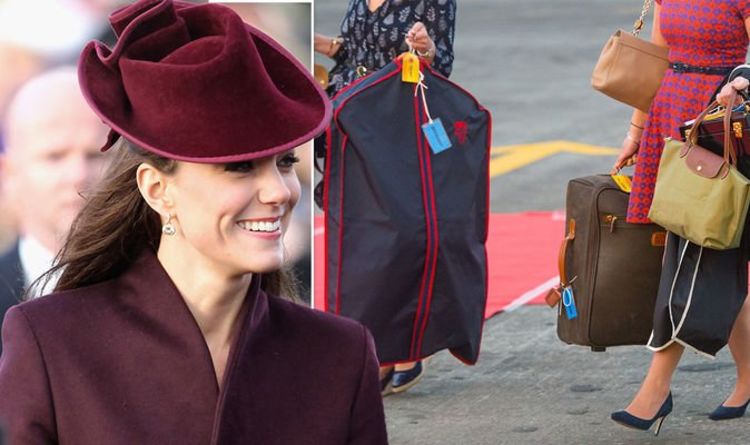 The Duchess of Cambridge is no stranger to travel, journeying around the world for royal duties, as well as in her leisure time. Her entourage is often seen carrying her many bags to and from flights when she jets off on international ventures.
However, according to insiders, it isn’t only foreign travels that see the Duchess piling up the suitcases.

In fact, even when going on shorter journeys around the UK, Kate packs more suitcases than the average traveller.

Carole Malone, journalist and commentator, explained Prince William’s wife has been known to take around “20 suitcases for a three-day trip”.

However, this isn’t necessarily because she isn’t able to pack light but rather due to some strict royal protocols she must adhere to when representing the Royal Family.

“For Kate when she goes away for three days its 20 cases.”

When travelling abroad, the Duchess has been known to go to extreme lengths to ensure all of her garments stay in one piece.

This is particularly important then she has gowns for state dinners with her.

According to royal correspondent Emily Andrews she has been on aeroplanes where the Duchess’ dresses get their own seat – sometimes even an entire row.

“When it’s small charter planes and there is space, her clothes do have their own row,” said The Sun’s Royal Correspondent Emily Andrews.

“This happened on a private plane we took in India to Kaziranga National Park.

“Natasha Archer [Kate’s stylist] brought all her dresses on and laid them over an entire row.”

“Obviously when we go to the airports, especially when it’s hand luggage only, we’re trying to cram all our toiletries into that plastic bag,” she said when interviewed for a previous Channel 5 documentary, Secrets of the Royal Flight.

“[Kate’s dresses] are not going to be shoved in the hole just to be squashed by everyone else’s.”

Alongside laying out important garments, the Duchess also has some special ways of packing to ensure her clothes arrive in one piece.

Often she tries to prioritise packing items made from “wrinkle-free” fabrics.

“All the Duchess or her ‘people’ have to do is familiarise themselves with the best wrinkle-free fabrics,” former creative director of Mulberry, Scott Henshall, told MailOnline.

“Typically synthetic fabrics such as polyester, nylon, acrylic and olefin have a natural resistance to wrinkles and a greater stability since they do not absorb water as efficiently.”