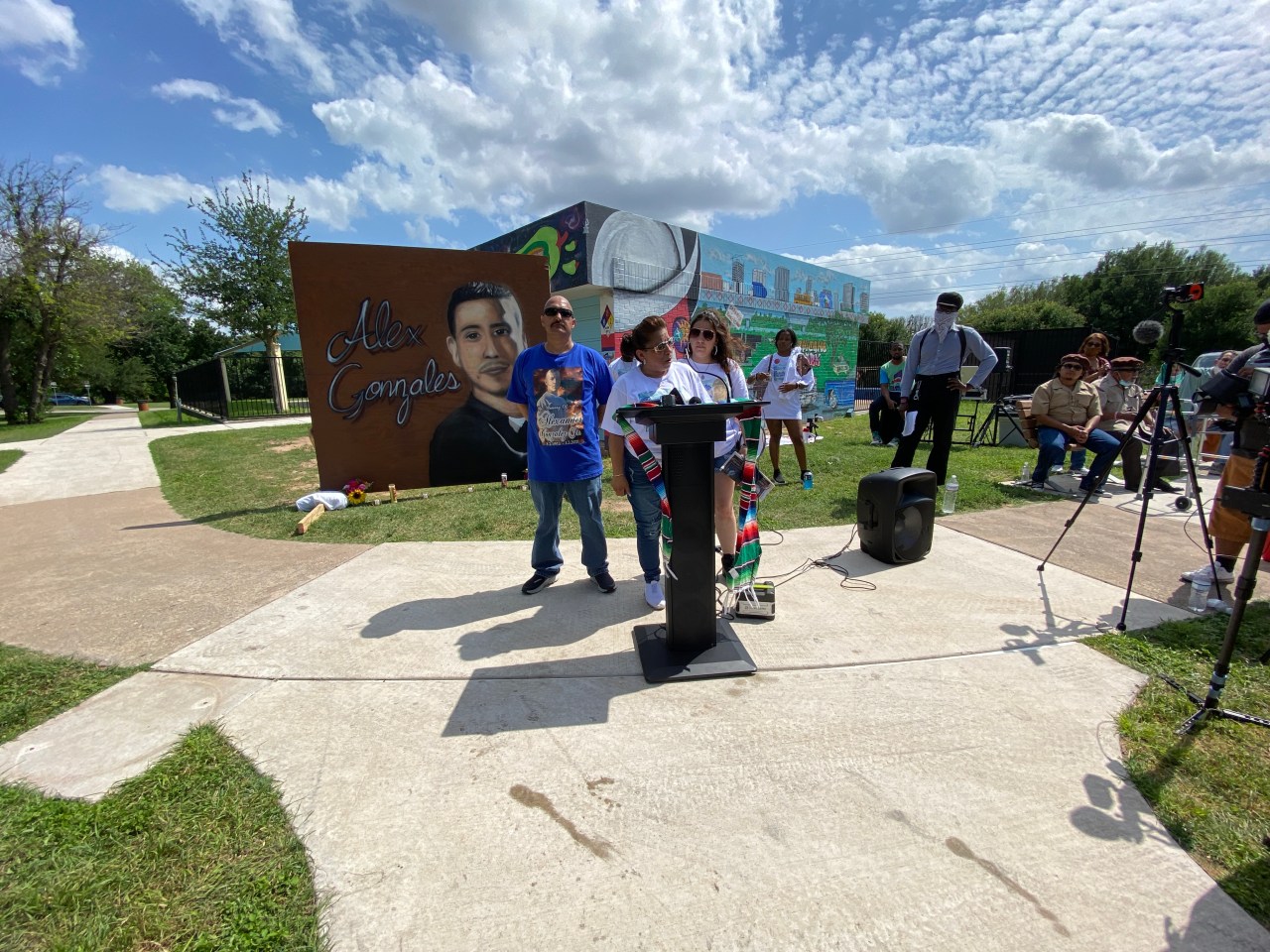 AUSTIN (KXAN) — Elizabeth Gonzales stood at a microphone in the middle of an Austin park Saturday, vowing to go after the City of Austin. Her son, Alex, was shot and killed by an Austin police officer on Jan. 5, after he was involved in a road rage incident with an off-duty officer.

“We’re going to get justice for my son and them two cops are going to go to jail and they’re going to pay for what they did because my family is not the same–never going to be the same again. Without my son he was everything to us,” Gonzales shouted into the microphone in front of dozens of people who marched with her family through east Austin.

Gonzales’ family and supporters marched through the neighborhood where the shooting happened. The march started at Huston-Tillotson University and ended at the Edward Rendon, Sr. Metro Park.

Gonzales’ father and sister also spoke during the rally.

“All lives matter, as I’ve said in previous times. The color of our skin does not define us. We all bleed red, we’re all the same. It don’t matter where you come from, what you do,” Angel Gonzales told the crowd. “We just need to get justice. Everybody’s grieving for the impact of my brother, my family, my parents, everybody that came loves him and that’s why we came.”

Organizers of the event, which includes community groups such as the Austin Justice Coalition, described it as a solidarity march and community celebration.

The investigation into the shooting and the road rage incident that preceded it are both still under investigation. Both officers remain on administrative leave.

The AJC said it is calling for the officers involved in the shooting, Luis Serrato and Gabriel Gutierrez, and APD to be held accountable over the incident.

They listed a series of demands, including the filing of murder charges, releasing the 9-1-1 calls made from the area of the shooting, and for an independent investigation of all formal complaints to APD.

Body camera recordings of the shootings were released by APD at the end of April. The video shows the interactions between the officers and Gonzales before the shooting.

The video shows Gonzales getting out of his car, going to the back passenger side of the car and reaching inside. The video shows officers yelling at Gonzales to stop and to not reach inside his car. Gonzales does not appear to acknowledge the officers. A responding on-duty police officer, Serrato, then shot Gonzales multiple times, killing him, according to APD.

Gonzales’ girlfriend, who was in the passenger seat, was also shot but survived. Their 2-month-old baby in the backseat was not hurt. Family members said Gonzales was likely reaching into the backseat to check on his baby since police had already shot into his car.

Attorneys for Serrato told KXAN in April they believed Garza was “damaging the legal process” by releasing the body camera video. The officer’s legal team thinks the video could prevent their client from receiving a fair trial.

“In no other type case is evidence released before a grand jury has even been empaneled. So, the real question is why is the district attorney treating police officers different,” attorney Doug O’Connell told KXAN in late April.

APD’s policy on critical incidents would have made the video available within 60 days. APD did not release the Gonzales video until 113 days after the shooting.

The Austin Police Association released a statement, saying it hoped Gutierrez and Serrato, who are members of the union, would be treated fairly as the case goes through the justice system.

“The APA and our membership value human life and neither officer who used force in this case woke up that day hoping to be involved in a shooting,” the statement said. “The unfortunate reality of police work is that officers are oftentimes put in situations where they are forced to react to the actions of others and at times, these situations end with terrible outcomes.”

Serrato has been with APD for two years. Gutierrez has been in the department for five years.

Garza said he expects the investigation to finish and the case to be presented to the grand jury sometime before the fall of this year.