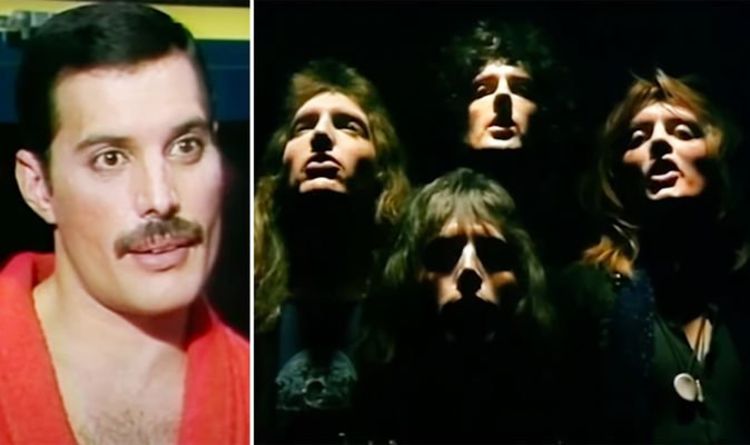 This year saw Queen’s Bohemian Rhapsody make the incredibly rare RIAA Diamond status in the US, with over 10 million unit sales and stream equivalents. This marked the first time a British band has ever achieved such an award and it’s unbelievable to think how Freddie Mercury, Brian May, Roger Taylor and John Deacon really had to fight for the song to be taken seriously as a single. The Queen singer, who wrote the chart-topping hit, famously said: “Compromise is not in our vocabulary.”
Despite mixed reviews upon release and its six-minute length, Bohemian Rhapsody topped the UK Singles Chart for nine weeks, sold a million copies by the end of January 1976 and is now one of the best-loved rock songs of all time.

But while Freddie was uncompromising on Queen’s music externally, behind-the-scenes he was something of a diplomat and peacemaker between Brian and Roger, who had competitive and creative energy.

Brian shared: “Yeah there’s a lot of truth in that. Roger and I are kind of like brothers.

“There’s a sort of…I would hate to say love-hate relationship, but I’ve said it!”

Brian added: “He was very much the guy who would sort things out and move things forward.”

Roger confirmed: “Yes, he would sort of make us see sense.”

Speaking with Express.co.uk earlier this year, Brian shared how he’s proud of Queen’s achievements but finds the band’s golden jubilee hard without its frontman.

Brian told us: “Well I’m proud. Of course, we’re proud of what we’ve done and we’re still around. We just kind of didn’t want to harp on it. We just thought, ‘Let’s just celebrate the fact that we’re still creative.’ I think it also…because Freddie’s not here it changes our feelings a little bit. There’s always going to be that little bit of…reticence in a sense.

“I’m very proud of what we do now with Adam [Lambert]. It’s been incredible, the sort of…the re-birth and response we’ve had around the world. And it’s great that we can own our own legacy, own our own material and keep it alive rather than it being a museum piece or fossil.

“So Queen music is very much alive thanks to that fact and that’s what we’re celebrating. The fact that we’re proud and we’re still able to come up with a few surprises here and there.”

After two postponements due to the pandemic, Queen and Adam Lambert will tour the UK and Europe in summer 2022.