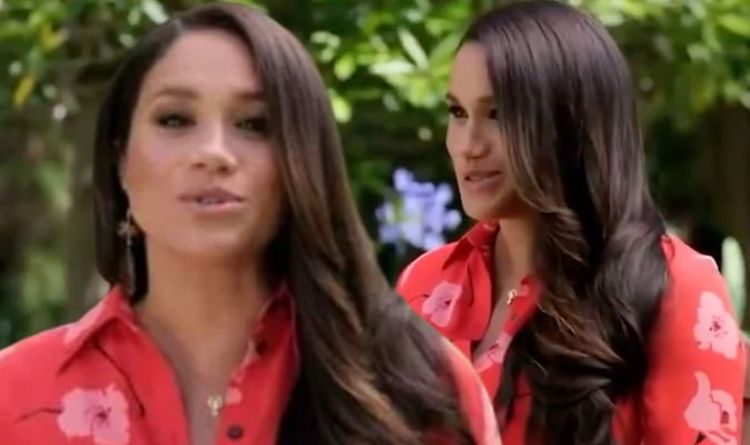 Meghan Markle spoke about her unborn child during a virtual speech for the Global Citizen’s VAX Live: The Concert to Reunite the World. It marked the first time the Duchess of Sussex has spoken publicly about her and Prince Harry’s baby girl who is due in “the summertime”, following the Oprah interview.
In the video, Meghan said: “My husband and I are thrilled to soon be welcoming a daughter.

“It’s a feeling of joy we share with millions of other families across the world.

“When we think of her, we think of all the young women and girls around the globe who must be given the ability and the support to lead us forward.

“Their future leadership depends on the decisions we make and the actions we take now to set them up, and set all of us up, for a successful, equitable, compassionate tomorrow.

Taking to Twitter to share their thoughts on the outfit, royal fans expressed how stunning the pregnant Duchess looked.

One person said: “She has impeccable taste in style, lovely Duchess.”

Another said: “Basically…I’m in love with Meghan Markle.”

“It’s the face, hair, earrings, watch and bracelet that I’m in love with,” a third fan said.

She also went for a peach blush and a nude glossy lip.

The appearance from the Duchess marks the first one since she and Harry dropped their bombshell interview with Oprah Winfrey.

For the interview with Oprah, Meghan went for a black belted silk dress from designer Armani that retails at around £3,000.

It featured a bold lotus flower print and she accessoried the look with jewellery from Canadian brand Birks and British designer Pippa Small.