SUGAR LAND, Texas — The Sugar Land Planning and Zoning Commission is awaiting regulation recommendations that could shape the future of the city’s more popular pedestrian spaces.In March, the commission met with Clarion Associates, a firm focused on redevelopment, to break down the goals and needs of the future of Sugar Land’s pedestrian-friendly areas.

Three years after Sugar Land City Council passed an updated land-use plan, the city hired the firm to assess the processes for regulating these mixed-use spaces. Dubbed “regional activity centers” and “neighborhood activity centers” in that plan, Clarion will recommend from the perspective of redevelopment the zoning regulation framework for the future of these areas.

Walkable activity centers are addressing a growing demand from young professionals for close proximity to shopping and entertainment, according to the land-use plan, which is intended to guide the future development and redevelopment of the city.

“That’s what we’re trying to figure out: What are the changes – if any – that need to take place to encourage redevelopment [in Sugar Land]?” said Ruth Lohmer, the long-range city planner for the city of Sugar Land.

The regulations of regional and neighborhood activity centers will shape the redevelopment taking place within them. Regional activity centers are new or redeveloped areas and will serve as destinations for the city and region.

Neighborhood activity centers are new or redeveloped smaller mixed-use developments that provide amenities to nearby neighborhoods, according to the land use plan.

“These areas are largely built out, and so the way that they’re going to become mixed-use centers is through redevelopment,” Lohmer said. “We want to proactively pursue that vision… and not just sit back and wait for them to happen on their own.”

Under existing regulations, the only way an area can become a mixed-use space is through a planned development district, but Clarion could identify alternative approaches to defining mixed-use spaces.

Under existing regulations, the development code establishes two different types of planned development districts: suburban and urban final development plan. The two types of districts were designed to regulate the development within them, but officials are concerned the existing process’s difficulty could dissuade property owners from moving toward redevelopment-leading to the need for Clarion’s insight.

RELATED: Sugar Land: From a small sugar town to a booming city!

The land use plan took five years to create and another three years to get on the budget. It encourages that redevelopment, and based on the city’s current state, redevelopment could be on the way in coming years, Lohmer said.

To prepare, the city is moving forward with Phase 1 of a two-phase process. It consists of Clarion researching best practices for zoning and other tools to implement mixed uses through redevelopment-meaning property owners changing or revitalizing an existing area. 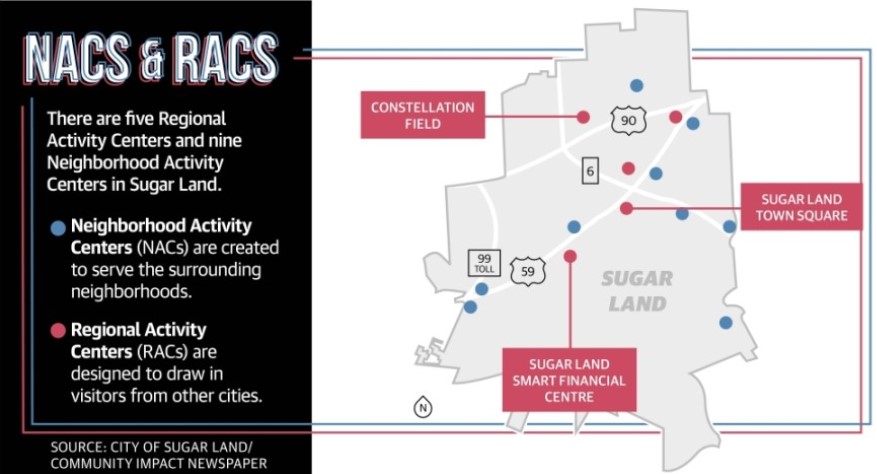 Clarion staff has begun that process by evaluating existing planned development districts and researching how similar cities have implemented mixed uses through redevelopment. They are also interviewing local stakeholders, such as property owners and community members, to develop the recommendations. Then, during the summer, Clarion will identify next steps based on their findings. Phase 2 will implement those recommendations.

At a March 25 planning and zoning meeting, Clarion Director Matt Goebel identified some of the firm’s preliminary findings on the process toward mixed-use redevelopment, including the discovery of bureaucratic processes, labor-intensive applications and a lack of flexibility. Lohmer said she had personally heard the existing process to achieve mixed-use zoning is long and arduous.

“[We want to] figure out how-what’s the best way – to implement [activity centers],” Lohmer said. “Because… the mechanisms we have in place right now – really the planned development district – is the only way to do mixed use. So, we just want to determine if that’s the best way going forward.”

Redevelopment comes in many forms: It could look like the redesigning of sidewalks to favor pedestrians and bicyclists or the addition of multifamily housing. Clarion’s job is to establish if using planned development districts is the most efficient process or if changes should be made to zoning regulations, such as additional ordinances, to make Sugar Land’s vision a reality.

The activity centers were outlined in the land-use plan, but only recently has the city begun fleshing out the path to making that vision a reality. To create the activity centers that the city has in mind, a planned development district would be the existing segue to mixed-use redevelopment.

“[It is different] where it’s just raw land, you know, coming out from the ground,” Lohmer said. “In this case, it’s redevelopment. [That difference] really brings different and unique challenges that we haven’t faced before.”

On March 25, the planning and zoning commission held a workshop to discuss the benefits and drawbacks of the current plan development process. Some commissioners had concerns about the process, such as an unstable market.

“Do you think that your survey is going to be outdated already because we’re moving into uncharted territory and development?” Commissioner Tim Hart said. “Is it possible you might recommend delaying large changes until we find out what more is going to change after we come out [of the pandemic]?… The markets are going to drive that, but the market is not there yet.”

Commissioner Suzanne Whatley expressed support for the plan but asked the firm how it is considering housing options in these areas-citing concerns about high-rises.

While there are a variety of housing options, Commissioner Dan Simeone said, based on his experiences with other multifamily housing proposals, Sugar Land residents do not want multifamily.

“They came out with torches and pitchforks,” Simeone said. “It made me realize how averse this community is to multifamily.”However, multifamily could offer more foot traffic to the area.

“What we have in town center is good, but it’s Friday-through-Sunday good,” Simeone said. “It’s not great Monday through Thursday.”

“We’re hoping that this helps make the process as clear, consistent and understandable for all parties that are involved,” Yearty said.

The spectrum of the firm’s recommendations could vary from advising the city to continue using the current process to making small tweaks to creating a standard mixed-use district, Lohmer said.

“Then you can then go place [the standard mixed-use districts] on these properties so when the property owner is ready to redevelop, they have a more streamlined and understandable process to go through to make that happen,” Lohmer said.

Commissioner Chuck Brown asked a similar question at the workshop.

“I think the big question here is: What does Sugar Land want to be when it grows up?”

This content was provided by our partners at Community Impact Newspaper.