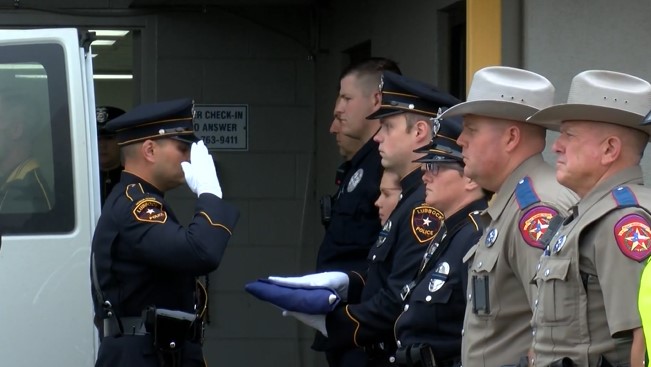 EDEN, Texas (Nexstar) — Two Concho County Sheriff’s deputies died in a shooting Monday night in a call that began as a dog complaint, according to the Texas Department of Public Safety.

An Eden city employee was also shot and critically injured. They are now being treated at Shannon Medical Center in San Angelo.

Jeffrey Nicholas, 28, has been arrested and booked into Tom Green County Jail in connection with the shooting. He is charged with two counts of capital murder of a peace officer and is being held on a $ 4 million bond, $ 2 million for each count.

Initial reports said there had been a short car chase and standoff though DPS did not mention either in its short news release.

What led to the deadly shooting

The Department of Public Safety said the two deputies and city employee responded to a dog complaint along the 100 block of Bryan Street in Eden. An Internet search of that area indicates it occurred either at or very close to Eden High School.

DPS says while those deputies made contact with an individual there, “an altercation occurred which quickly escalated to gunfire.”

Eden is about 160 miles west of Austin.

The bodies of the slain deputies arrived in Lubbock for autopsy at around 10:45 a.m. Tuesday. First responders in Lubbock accompanied the car in a short procession.

“The loss of life in that community is extraordinary and I’m extremely saddened by that,” State Rep. Drew Darby, R-San Angelo, said. He led the Texas House in a moment of silence Tuesday morning.

“When they left their homes that morning in Eden, Texas, you know, just the the mere image of the name conjures about peace and tranquility— when they left, they would not return to their families,” Darby said.

“Our hearts are broken over the senseless murder of two Concho County Sheriff’s Deputies who were gunned down in the line of duty. This terrible loss is a solemn reminder of the risks our brave law enforcement officers face while protecting our communities. The State of Texas is prepared to provide any assistance needed to support the Concho County community and bring the perpetrator of this heinous crime to justice. Cecilia and I ask our fellow Texans to join us in prayer for the families, friends, and colleagues of these brave Sheriff’s deputies.”
Gov. Greg Abbott, R-Texas

“Camille and I are absolutely devastated by the news that two of our Concho County Sheriff’s deputies were killed in the line of duty last night in Eden. These officers protected the community until the very end—defending our freedoms, values, and safety. Though we are unable to thank them for their sacrifice, we will never stop honoring their legacy and service.

“I’ve spoken with Judge Dillard, Mayor Torres, and Sheriff Miller to offer my condolences. My office stands ready to provide any support that we can.

“We join with our Concho County neighbors in mourning the loss of these heroes. Please keep our entire law enforcement community in your prayers.”
Rep. August Pfluger, R-District 11