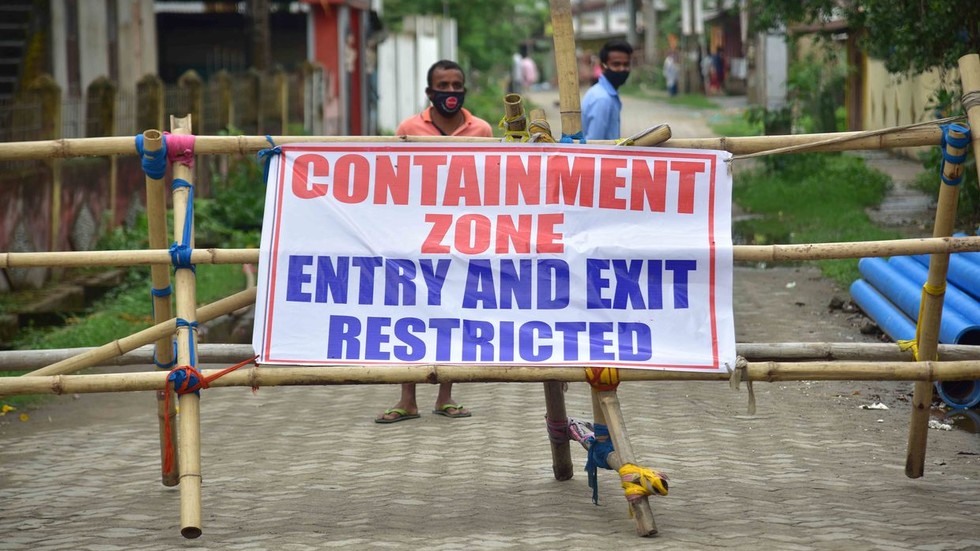 India’s latest upsurge in coronavirus cases, along with its highest daily toll of Covid-19-linked deaths, is expected not only to hamper its economic recovery but also to drag down several sectors vital for the world’s economy.

Rising infections are forcing the country to impose stricter lockdowns, which could have a dramatic impact on several industries, including financial services, global shipping, clothing, pharmaceuticals and many others.

The situation may create a big “shortage of seafarers” as some 200,000 of an estimated 1.7 million of the world’s sailors come from India, said Guy Platten, Secretary General at the International Chamber of Shipping, as quoted by CNN Business.
Also on rt.com India’s exports nearly triple in April despite huge spike in Covid-19 infections
Since nearly 80% of the world’s trade volume is carried on ships, global shipping could feel the pain of a worker shortage. That may be exacerbated by the latest bans imposed on flights from India, preventing Indian workers from moving to ports around the world, and crews from swapping.

Additionally, India is home to the world’s largest vaccine maker. The Serum Institute of India (SII), produces over 60% of all vaccines sold across the globe. Moreover, the country is the world’s largest supplier of generic drugs – copies of brand-name pharmaceuticals that have the same effects but cost less.

The latest outbreak in India has partially stalled the world’s vaccination drive, as the country’s authorities have shifted focus from shipping vaccines abroad to prioritizing Indian citizens. Meanwhile, Indian drug makers, which receive nearly 70% of their raw materials from China, reportedly expect production declines due to the vulnerability of supply chains.
Also on rt.com Gold losing its shine for India amid deepening Covid-19 crisis
“Most countries depend on India for generic drugs, and India depends on China for raw material. It will be a big blow to global pharma supply chain if trade between the two is disrupted,” Tinglong Dai, associate professor of Operations Management and Business Analytics at the Johns Hopkins Carey Business School, told the media.

A pandemic-related shortage of workers has also severely hit the textile industry. As India is one of the largest textile exporters in the world, the clothes-making sector is projected to suffer a direct hit.

Absenteeism among employees in the sector is 50%, according to consulting firm Wazir Advisors, which also reports that domestic clothing industry consumption and exports dropped 30% and 24%, respectively, in 2020.
Also on rt.com India’s economy may shrink amid soaring Covid-19 cases, analysts warn
Suppliers of financial services, including banks and accounting firms, which have moved their back offices to India, are reportedly shifting to other countries, allowing staff to work from home and extending project deadlines.

“A significant number of EY people and their family members have been directly impacted by the severe second wave of Covid in India,” Julie Teigland, a regional managing partner, told CNN Business.